Review: A World Not Ours

Screened at this year’s Portland International Film Festival, “A World Not Ours” was Lebanon’s entry into the 2014 Oscar competition for best film in a Foreign Language. It’s all about the 64-year-old Ain El Helweh refugee camp for Palestinians in southern Lebanon. 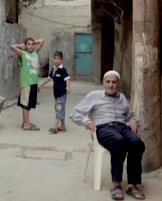 Meet Jean-Paul Sartre’s literal “No Exit.” In this cramped make-shift UN-contrived holding tank, 70,000 refugees are sequestered into one square kilometer. Not assimilated into Lebanon and restricted in their travel, as they don’t have passports, these Palestinians have literally been imprisoned for over 60 years.

Palestinians in refugee camps have no rights and no jobs. To help them survive they get a small monthly allowance from the camp Fatah office for coffee and cigarettes.

A delightful young man, Mahdi Fleifel, narrates his own association with this village of his grandparents to the puzzling choice of background music that includes cuts from The Tommy Dorsey Band, just to accentuate the bizarre disconnect of these refugees from the rest of the world. Steeped in the past, wishing for a time long gone, the reality of the present is soured with frustration and hopelessness.

Since Fleifel has inherited his father’s obsession with a video camera, he has an archive of film that documents the life of Ain El Helweh for years.

Early on, Fleifel’s father had been able to leave and work in Dubai. From there he was able to connect with a relative and eventually move his family to Denmark. But each summer, Mahdi spent time with his grandparents – and he regarded this as better than going to Disneyland. His father caught it all on videotape.

Many of the refugees have been able to leave the camp. Fleifel’s grandfather could come live with his family in Denmark, but he has chosen not to. Fleifel’s grandfather says, “We will never forget our land, son. It’s our forefathers’ land. And one day we shall return with God’s help and through hard work. We will return, God willing.” To leave the area would be treasonous to his dreams of repatriation.

Interviewing his best friend at the camp through summer after summer, Mahdi learns that his friend finds camp existence more difficult to bear as he ages. Finally, perhaps in his 30s, the friend says, “I want to go on a mission and blow myself up, man. I bet most of the guys who blew themselves up felt the same way I do. No future, no work, no education … They just used Palestine as an excuse to end their lives.”

Just like the Israelis keep some aspect of the Holocaust alive each year in the arts, so do the Palestinians keep their forced diaspora alive. This is one story about the consequences of that implacable resistance. 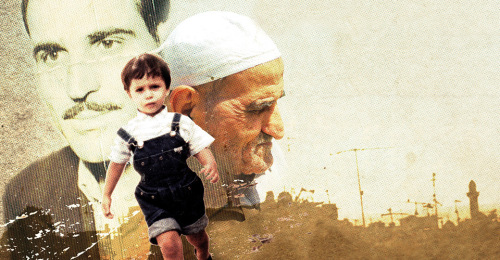 “A World Not Ours” is being featured at
The 37th Portland International Film Festival
on February 14 and 16, 2014.