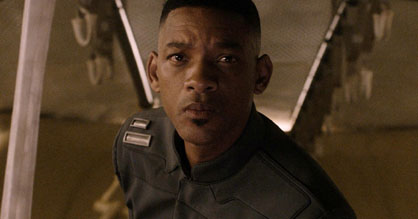 Infamous director M. Night Shyamalan is returning to theaters with “After Earth,” a sci-fi adventure that fits into his known repertoire, but with his credibility to make good movies on the decline for the past decade was it wise for the studios to trust him with such a big budget film? Can “After Earth” be the director’s return to good movie-making or will it be another nail in the coffin that was once a promising career? Read on and find out!

A thousand years after we have abandoned Earth due to ecological disasters that made the planet inhabitable, the human race has settled on a new planet called Nova Prime. However, we weren’t the only ones interested in the planet because we have been engaged with an alien race for the past millennia for dominance of Nova Prime.

We have created a military force known as “Rangers” to combat these hostile aliens and the best and most renowned Ranger is Cypher Raige (Will Smith). Cypher is said to be completely without fear – which is good because the aliens can smell fear and he can become invisible to them. His son Kitai (Jaden Smith) has been training to become a Ranger to please his father, but their relationship is all but non-existent.

Cypher takes his son on a routine interplanetary trip, but the spacecraft is damaged and crash lands on a quarantined planet — which happens to be Earth. The father and son must travel to find the other half of their craft to activate the homing beacon to call for help, but Cypher is gravely injured in the crash and Kitai must traverse 1,000 kilometers of savage forest and mountains alone to retrieve it.

Filled with fear and not fully trained, Kitai will have to face off against creatures that have evolved and adapted into being the dominant species, as well as a planet that complete freezes every night. To add to the danger, one of the aliens from Nova Prime was captured and on their vessel when it crashed and could be hunting the young Ranger the entire time.

I am sad to say that even though I was rooting for this film to be a success, and for M. Night Shyamalan to finally get back to making good films, this particular endeavor was unsuccessful.

One positive for the movie is the father-son relationship and Will and Jaden Smith once again have a great connection. In their sophomore endeavor together onscreen (after “The Pursuit of Happyness”), the Smiths work well together. However, the focus this time is all on Jaden Smith as the majority of the story and action center around his character. And this might be one of the main areas where the film went wrong.

To take such a charming and charismatic actor as Will Smith, and then make him a back-up character with the emotional range of a wet rock, is just wasting a good resource. Jaden does fine in his role, but he doesn’t seem to have developed the likeability that his father has shown onscreen. I enjoyed seeing them together, but with his injury Cypher is relegated to being on the radio talking to Kitai the entire movie, which further diminishes their screen time together.

Other cons of the film were the lackluster visual effects, odd and distracting accents by our two protagonists and a very generic and predictable storyline that has been done before. With a movie that cost roughly $130 million, I expect to not see CGI that looks fake and cartoonish. When you want us to be on the edge of our seat in anticipation, then don’t have these creatures and aliens that look like they were copied from a film 10 years ago. It’s distracting and pulls you right out of the moment.

Also, I am not sure whose choice it was to give the father and son duo these odd accents, but it was a bad idea. I get that over time our dialect and inflections would have changed, but when a young actor such as Jaden (who obviously has not had the fine-tuning that his father has in the area), it shows as I heard multiple times the sound of the accent changing, once again something distracting that pulls me out of the moment.

I get that Shyamalan is trying to revive his career, but when you are known for making films with twists and then make a movie with none whatsoever, the audience is let down. The problem with the movie isn’t any one single thing, but a multitude of small choices that turned out to be wrong and they add up and eventually dwindle down the cool moments making the film average and too vanilla.

No one wants to see a mediocre sci-fi fantasy film when in the past year we have had entertaining and thought-provoking films like “Prometheus” and “Looper,” that even at their worst were engaging and fun to watch.

The bottom line is that I was hoping for and expecting more. I figure that since Shyamalan wasn’t completely in charge of story, script and directing that there was hope for “After Earth,” but after seeing it is apparent that he missed the mark. I wished that I liked it more and could give it a strong recommendation but unfortunately I cannot. So watch “After Earth” at your own risk and if you do see it in theaters, you will probably leave thinking about the other films you could have seen instead. 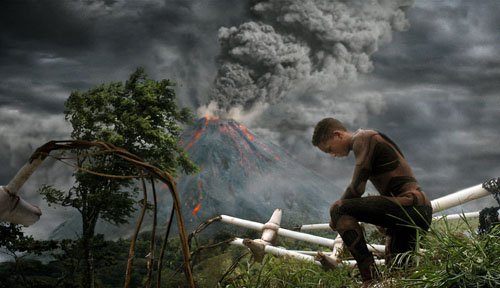 “After Earth” is in theaters now and is rated PG-13 for sci-fi violence and some disturbing images. Also appearing in the film are Sophie Okonedo, Zoё Kravitz, Glenn Morshower, David Denman, Lincoln Lewis and Gabriel Caste.