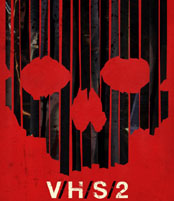 Red-band trailers are becoming more and more mainstream and I completely appreciate what they offer moviegoers. These types of trailers help all movie genres. They can display funnier moments of an R-rated comedy, or the gritty language of a drama, and for horror films, your blood and guts target audience gets a glimpse at just how much gore they can expect. The red band for “V/H/S/2” is no exception.

Cam footage is a technique that many horror movies implement, but I must admit, from the trailer, I am really digging the style of “V/H/S/2.” It looks authentic and pretty bloody, which off the bat is a win-win for myself and similar horror buffs.

Like so many horror flicks before it, I get the distinct impression that this sequel is not one in which you needed to have seen the original, it just builds on an idea presented in the first and tells its own story. The premise is pretty simple and straight forward, some video tapes are found and their contents are not for the faint of heart. Standard horror formula, no doubt.

What really makes this trailer stand out is the way in which it was shot and the way it is being presented. There were some scary moments in the trailer that really got me interested, and definitely made me want to check out this flick.

Now, I have not, in fact, seen the first installment so I really have nothing to base any sequels off of, but after seeing the red band for the sequel, not only do I plan on watching “V/H/S/2” but I plan on making it a double feature night.