Review: Alice Through the Looking Glass

It was obvious something was up with the release of the first teasers of this splashy tale. Yes, Linda Woolverton’s screenplay has nothing to do with Lewis Carroll’s 1871 “Through the Looking-Glass, and What Alice Found There” — except about half of the characters. That is not to say it is not a good story, but the story takes a back seat to the great costumes and set design, backed up with spectacular animated special effects. 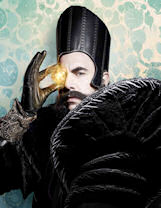 This story has Alice, an accomplished ship’s captain, piloting a time machine to rescue the family of the Hatter (Johnny Depp). Unfortunately, this destroys the original concept, that of a child’s beautiful, untamed imagination run wild.

There is no imagination in this screenplay, Alice knows exactly what she is doing all the time. So the story is reduced to the limited confines of a “Back to the Future” narrative. “You can never change the past, but you can learn from it,” we are told. The film makers would have been better off if they had learned that cinematic time travel is yesterday’s news.

Mia Wasikowska and Helena Bonham Carter do good work playing Alice and the evil but misunderstood Iracebeth, but Sacha Baron Cohen steals the show as Time. His character is critical to the remade vision of “Alice” because the plot is all about time. Cohen is able to bring his “Borat” goofiness to the role the grim reaper who is no one’s friend. Coupled with an ersatz time travel railroad hand car (part of the superb production design), Time makes Alice’s gleaming chariot look like a Chevrolet.

Disney continues to make progress towards girl empowerment. Not only does Alice save the day with no help from any of the male characters, but she accepts and even teams up with her formerly double crossing mom. She also triumphs over sniveling coward Lord Hamish. For his portrayal of the rejected lord, Leo Bill deserves a nomination for best sniveling coward of 2016.

The real congratulations go to the supporting crew, including a super score by four time Oscar nominated Danny Elfman. Cinematographer Stuart Dryburgh, editor Andrew Weisblum and production designer Dan Hennah all have Oscar nominations to their credit. They are what makes this flick happen. Without their backup, the prodigious eccentricity of Depp and Bonham Carter would be for naught.

Costume designer super star Colleen Atwood had a field day. Apparently given carte blanche and a blank check, her work is without compare. When Cohen is knocked down because his airplane-wing shouldered tunic will not fit through the doorway, we have Atwood to thank. She has eleven Oscar nominations including three wins (including “Alice in Wonderland” in 2010) and this film could be the twelfth.

Oscar nominated Joel Harlow reunites with Depp after a dozen previous films to do his makeup. The eye treatment alone is worth the cost of admission. Available in IMAX 3D, if you get a chance to see it in that format, do not miss it. The images are everything. 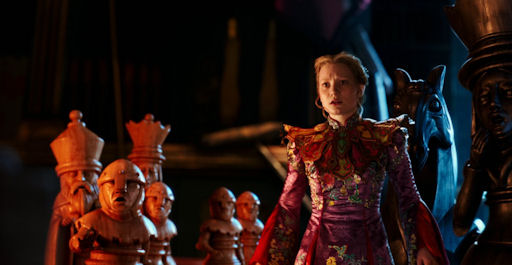