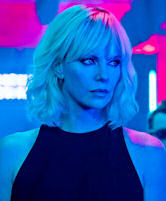 What a fantastic cast. Oscar-winner Charlize Theron, Eddie Marsan fresh off his starring success in “Ray Donovan,” John Goodman, one of the greatest actors alive, Toby Jones, spymaster supreme from “Tinker Tailor Soldier Spy,” and Roland Moller, star of indie smash “Land of Mine.” How could such a pot of gold go wrong?

Coming into the theatre there was one clue. Director David Leitch? The stuntman? OK, a great stuntman who has worked with the best. But in his solo debut directing effort, directing a cast with an awards list as long as the barrel of an M-16? It was ordained by the gods of summer cinema. The show went on.

Opening scenes show Theron (spy Lorraine) emerging from an ice bath, beaten to a swollen pulp and looking exactly like Aileen Wuornos in “Monster.” Finally, world-class, no-frills, straight-up acting by Theron. We are elated. Then Goodman and Jones are interrogating her in a sealed chamber deep in the bowels of some secret spy center. This is going to be good. Mysterious soul searching. Torture even.

Back to the interrogation room. She is really on the hot seat. Goodman and Jones have not changed much. Nor has Theron.

Then back to the fights. She kills and maims with guns, knives, high heels, lamps, sticks, pipes, key rings, garbage, fast food containers, bicycle tires and handy wipes. Specially-trained in cork screws, hot plates and freezer doors, she should be crowned the Killer Queen of Kitchen Implements.

Russky spymaster Rolland Moller comes into play. Something is fishy. A traitor. Alone with a squad of vicious, heavily-armed trained assassins, Theron grabs a western cowboy lariat and ropes, tricks, strangles, whips, slaps, trips, chokes, blinds, hog ties, dog walks and drag lynches at least a dozen before diving out a window and swinging in for a break.

No James Bond, neither shaken nor stirred, is on her agenda. She likes her vodka poured, neat and cheap, and consumed a third of a bottle per drink.

Eddie Marsan pops in, fresh from nearly stealing the show from Liev Schreiber in “Ray Donovan.” In this flick, his ultimate achievement is an underwater scene in a sinking car reminiscent of Shelley Winters in “The Poseidon Adventure.” He has almost no lines. OK, nobody really has any lines. John Goodman’s part could have been played by the catering prep cook. In this action lollapalooza, the actors let the fights, car chases, shootouts and explosions do the talking.

The only actor in the whole movie who seems to care about what he is saying is Ronald Reagan. “Mr. Gorbachev, tear down this wall!” It must have been he who brought the lariat. 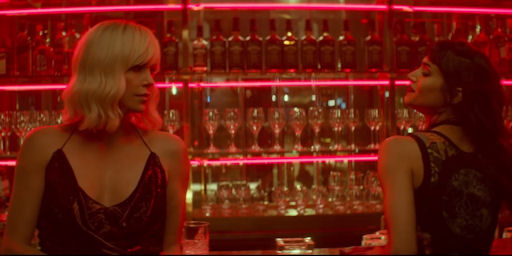