Ocean’s Eleven: From criminals to superheroes

Superhero movies are at their biggest these days with the Marvel universe blossoming from countless storylines to come together for the climactic Infinity Wars films as well as DC working its way up the Justice League movie. “Black Panther,” “Captain Marvel” and “Cyborg” are just a few instances of titles to look forward to on the horizon.

But back in the early 2000s, when superhero movies such as “Spider-Man” were just starting, there was another series that, while it might not have starred comic book characters, created everyday heroes out of common criminals. 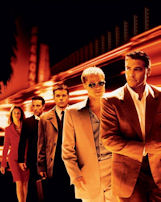 That’s right, we’re comparing “Ocean’s Eleven” to “The Avengers,” but hear us out.

“Ocean’s Eleven” is a film focused on a man looking to accomplish something great. In order to do so, he has to seek out the help of a group of like-minded individuals who all specialize in something different. Sounds a little like “The Avengers,” no?

In fact, these two worlds aren’t as far apart as you’d think. You can even see games in casinos that merge the two worlds of superheroes and gambling, proving that sometimes playing online casino is about Guts and Superheroes. However, one glaring difference between the two movies is the setting in which the movies take place. In the first Avengers movie, we’re looking at New York, while in “Ocean’s Eleven” the plot is set in multiple Las Vegas casinos. While the two places might have a fair few differences, you have to keep in mind they are both fast-paced, noisy places — the perfect environment for the kind of action that both movies showcased.

That Las Vegas setting also helped “Ocean’s Eleven” become unique. While Cap and the Avengers fought to protect the world, Danny Ocean fights against security measures. This solidifies the Ocean’s movies more to reality, something many might not associate with superhero movies, despite Christopher Nolan’s popular Batman trilogy being praised for having that same trait.

However, while casinos are a product of the real world, they are also more fanciful than something like New York city. Casinos are examples of a magical place where people dress fancy, lavish shows are happening every hour and large sums of money are up for the winning.

It’s this merging of everyday and extraordinary that gives “Ocean’s Eleven” a certain flair not seen in many other movies. It’s that same authenticity for which Variety writer Owen Gleiberman praised the recent “Logan” movie, saying “There have been comic-book movies, here and there, that strike a nerve of reality, and always to the benefit of the movie.”

“Ocean’s Eleven” strikes that same nerve, one that shows the lives of the characters we’re watching and gives us an understanding of why they have the motives they do. Without the help of the casino setting, this same reality and feel might have been impossible to accomplish.

But the superhero qualities don’t stop with Las Vegas. The movie’s tone — serious but always underlined with the humorous banter of the eleven — stays lighthearted throughout in much the same way the Avengers movies always keep viewers laughing with superheroes who are hopelessly outnumbered. In both of these titles, the tension is always masterfully trimmed by comedic tools, only being as serious or thought-provoking as Tony Stark’s or Danny’s one-liners will let it be. Viewers get to feel like they’re part of the adventure as they laugh along with the rest of the crew. It’s these inside jokes shared between on-screen characters and theaters full of people that both build intimacy, but set the tone in a way only superhero flicks typically can.

There’s even an article by moviepilot.com that explores the importance of humor within superhero films and how each major studio responsible for shooting caped crusaders deals with the matter. Clearly, we can see how Danny and his band of smart mouths feel about the subject.

Lastly, many big superhero movies release sequel after sequel or have a spin-off/reboot here or there. “Ocean’s Eleven” director Steven Soderbergh also decided one wouldn’t be enough and added two more sequels. In fact, the series is even getting the Ghostbusters treatment as talks of an all-female cast “Ocean’s Eleven” have popped up across the internet.

So even though there is no magic, evil overlords aren’t trying to take over the world and our main characters don’t have super powers, combined with the casino setting and certain cinematic elements, “Ocean’s Eleven” proves that superheroes, and their films, come in all shapes and sizes.