Review: From the Land of the Moon

This complicated psychodrama starts with Gabrielle as a very unhappy young woman. She is young and impetuous, to say the least, and sure to have her own way. This promises to be a deep look into the life and mind of a troubled woman. Unfortunately, there is so little convincing development it is hard to tell if the girl is insane or simply spoiled. Nor is there sufficient philosophical background to fill out the persona of a woman ahead of her time, or gifted with an omniscient look at the freedom of the future. 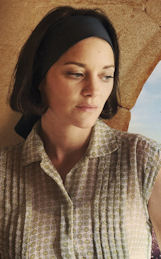 Gabrielle’s mother arranges a marriage to the dubious Jose (Alex Brendemühl), while her father looks on. Jose is set for a major promotion, becoming a successful contractor instead of being stuck as a laborer. Indeed, one wonders how he ever ended up in the fields to begin with.

As it turns out, Jose loves Gabrielle, but even this is not clear for the first half of the film. By the end we know the truth, but it is too late. We have been forced to watch a nebulous playing out of mixed fantasy with too many flashbacks, and Marion Cotillard’s unsuccessful playing out of a tragic figure.

After a terminal breakdown, Gabrielle is sent to a sanitarium. Here she meets lieutenant André Sauvage (Louis Garrel), recovering from a severe wound suffered in Indochina. In a wonderfully spooky revelation, we realize he was fighting in Vietnam, one of the first wave of modern western soldiers to be maimed and traumatized there.

The room next to the lieutenant’s becomes vacant. In a powerful bit of photographic construction, the bare iron bed frame is shown in front of stark open window with the ugly mattress hanging out to air. All perfunctory ceremony aside, this is the end for those in the hospital; an institutional vaporization, making way for the next in line. A five-minute conversation tells the story of his life. Like Gabrielle, he is neither here nor there, hoping to recover but afraid of what his mind has in store.

The problem is that Gabrielle’s personality wobbles between too-wise-for-her-years and psychopathic. Either story could have been a good one given Cotillard’s superb acting skills, but neither is adequately performed. We do not have sufficient backstory to know if she was ever normal and her reaction to Jose’s feelings is too flat to involve the viewer.

The overall impression is that she is caught copying Isabelle Huppert’s classic character of the unmoored modern woman in a role where romantic love is the centerpiece. One can have it either way, but not both. As Huppert is quoted, “Acting is a way of living out one’s insanity,” but “From the Land of the Moon” writer/director Nicole Garcia seems to be saying “Living out insanity is the way you should be acting.”

The beautiful cinematography of Christophe Beaucarne seems routine, as if he is forced to make sense of the mixed emotions and smooth over the tedium with a lush background populated with the beautiful and erudite.