There is more to Robert Sickels and his work than immediately meets the eye, just like the little town he portrays. Five of his shorts, featured at the Northwest Film Center Aug. 2, were all shot in cozy, tree-lined Walla Walla, Wash., the complicated home of Walla Walla sweet onions, fine wine, Whitman College and the state penitentiary. 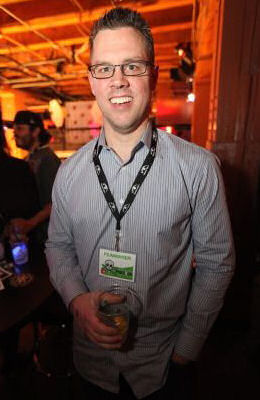 First off, Sickels is not just a filmmaker. He plays wiffleball, cornhole, bingo and is a baseball fanatic and cyclist. He is also a mixologist who writes academic books on the entertainment industry. He has his own production studio, a Ph.D. and teaches in the Film and Media Studies Department at Whitman College.

So, if I can understand people’s passionate diverse feelings about to-mow or not-to-mow from Sickels’ “American Lawn,” I should be able to understand why people voted the way they did in the last election, right?

IJM: I see that there is an interview aspect in your films. Good people ardently disagree on innocent subjects, like the lawn or a burial marker. Was that consideration a conscious effort at the time of film development, or did it evolve as you filmed?

RS: It’s incredibly intentional! And I do think it reflects the differences between people everywhere, which, paradoxically, unite us all. I once had a college professor tell me that the key to art is to reveal the universality in particulars, and I’ve never forgotten it and it’s been the guiding principle in my work.

IJM: “American Lawn,” an interview piece on perspectives about lawns, is reflective of the diversity in American voices. If we differ so greatly on lawns, how can we find common ground in politics? I realize it was created in 2013 and released in 2014, but I wonder, have people reacted to it as a parallel to the 2016 election and divergent political views?

RS: It wasn’t meant to be a commentary on contemporary politics, but it certainly can be seen that way in that lawns are something about which people aren’t going to change their minds no matter what. If you love lawns, then you do so unequivocally, whereas if you hate them, you also do so without reservation, and never the twain shall meet! This certainly mirrors our current CNN or Fox, but not both, moment.

IJM: What was the seed for the lawn film?

RS: I wanted to make a movie about something mundane about which virtually everyone would have an opinion in the hope that those divergent opinions could reflect something larger about our culture while at the same time illustrating that nothing’s really as simple or obvious as it seems on the surface.


IJM. I was also especially interested in “Molasses & Lemon,” metaphors for love and a break-up. Did your association with college students and their experiences spur that subject?

RS: Actually, no, it really didn’t. I did interview a number of students for the piece, but only one made the final cut and he proved to be wise well beyond his years. Everyone else in the film is well beyond their college years. What I did discover is that once you have enough experience with relationships, the ways you talk about falling in love and heartbreak are remarkably similar, and that really surprised me.

IJM: Why did you choose an academic path to filmmaking and what is your creative strategy?

RS: I always wanted to be a college professor, and the degree is a requirement of the job so I had to get it. That said, I don’t consider myself an academic filmmaker per se. I’m just a filmmaker who also happens to be a college professor. My training, expertise, and interest are much more historical than they are theoretical, so I think my influences are certainly more from the form itself than from what people have thought about it.
I’m incredibly lucky that I have the job I have, which I absolutely love, as it allows me to make films without worrying about the commercial imperative. The trade off, of course, is that I make them for essentially nothing and they aren’t the kind of movies from which I’ll ever profit, but as that’s not my goal it’s not an issue for me.

I always tell my student documentarians not to force a POV — instead, let the movie tell you what it wants to be, and that’s something I very much try to do in my own work as well. Ultimately, I suppose the finished films are intentional in that they’re meticulously edited a particular way, but I don’t know what that way will be going into the process.

I do storyboard what I can in advance, even if it’s just how I’m going to frame the interviews. I location scout a ton and while some of the best B-roll is random, I plan out 95 percent of it. I don’t write out themes in advance, but once I start editing I make massive flow charts that connect the threads in the various interviews. Docs aren’t live action, so you just can’t pre-plan them in the same way, but I plan every single thing I can as it helps me to control what the final piece will look and feel like.

IJM: Walla Walla is a charming town with a snug little intellectually charged campus. What effects do the quiet shaded streets, the agricultural wealth, the prison, the intellectual richness and the isolation from metro areas have on your work?

RS: Being in WW is the driving factor in my work. Having previously always lived in urban areas, I used to struggle living here in that I thought I could never find subjects worthy of documenting, then, beginning with “Walla Walla Wiffle,” I realized living here isn’t a hindrance — it’s a gift! In my work, Walla Walla is an idea as much as it is a place. If I can make a movie here (and they’ve all been made here) that resonates with people everywhere, then I have made the particulars universal and that’s what I love to do in my work more than anything.

Sickles’ documentary shorts have won awards throughout the US and abroad. Since 1999, he has taught Film History and Filmmaking at Whitman College, where he is the director of the Film and Media Studies Program. Five of Sickels’ shorts will be featured at the Northwest Film Center on Aug. 2, 2017.

You can see more of his work by visiting https://vimeo.com/tag:robert+sickels.