Emerging director Cate Shortland’s kidnap thriller “Berlin Syndrome” is well done but adds little to the genre. Australian photojournalist Clare (Teresa Palmer) meets college writing professor Andi (Max Riemelt) and the two instantly fall in lust. There is a one-night stand that could have developed into something more. But, as Clare puts it to Andi the next morning, “Sometimes it doesn’t mean anything.” 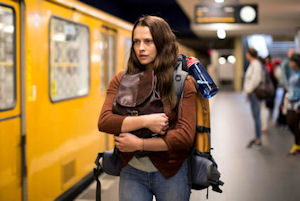 Thanks to good acting by Riemelt and/or good directing by Shortland, we have a feeling this is not going to fly with Andi. Sure enough, Clare wakes to find something curious about the apartment. It has a door with several locks that could have been used on a UBS branch bank and the windows are lined with bullet proof tempered glass that resists thrown chairs. She is trapped, essentially kidnapped by the looney-tunes Andi in a cell that looks, amazingly, like a normal apartment.

This is when the screenplay starts to fall apart. The concept that a person can be free to roam around an apartment and make unlimited noise, start fires, use any cutting/prying tools they can find, kick holes in walls/ceilings/floors and not be able to, at least, attract attention is ridiculous. The man appears to be a low-level lecturer, and part time gym instructor, at best. He does not have the training, tools or money to build an impenetrable Bat Cave in an above ground Berlin apartment.

Given world class acting and a world class screenplay the viewer would overlook this. Such was the case in the James Caan/Kathy Bates classic “Misery.” Bates is sufficiently mesmerizing that we are living for her performance. But even her character takes zero chances with her victim. He is bound hand and foot.

The title “Berlin Syndrome” appears to be a reference to “Stockholm syndrome” in which a captive victim begins to identify and sympathize with the perpetrator, grasping on to them for support. Clare never shows any believable sign of feeling for her captor that could not be construed as trickery, or even simple lunacy. If she passed up a chance to escape, that might have been a workable angle. As it was, the story is one of capture and escape and nothing more.

Her missed opportunities are shown as panic or incompetence, a daring and well-planned move followed by paralyses. This does not help us get into her bizarre state of mind, it merely confuses us with what appears to be contradictory behaviors.

Even as the screenplay trips over itself, the cinematography by Sundance winner Germain McMicking (2014 “Partisan”) is entertaining. The shots move from the dull under-achievement of collegiate pedagogy to the bizarre pretense of happily married life at home with a reluctant, screwdriver stabbing partner. Andi’s political activist professor father does not shed much light on the story. He is as self-absorbed as the next pedant, but not to the point of turning his son into a serial criminal. The father dies and Clare gets her chance. What is his part in this movie?

A syndrome without the syndrome, “Berlin” is a couple twists short of something new. 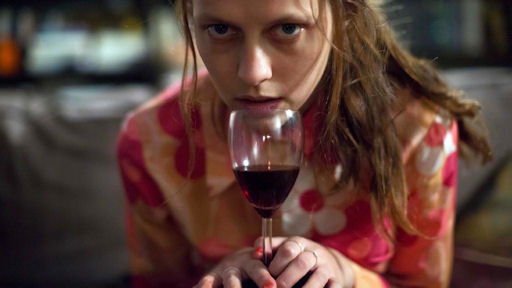