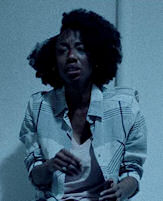 Thank goodness Nolan dumps that trail because the bad memories are the best part of this psycho pot-boiler. Writer/director Emmanuel Osei-Kuffour’s feature debut (co-written with Wade Allain-Marcus and Stephen Herman) is a remarkably assured tour of several damaged lives and how they intersect in the realm of medical high tech.

Motherhood plays a big part in this thriller. There are three moms. Two are the dead mother of precocious Ava, Nolan’s daughter and guiding star, and the live mother of dead Thomas. The third is mother science in the form of Dr. Lillian’s brain wave machine, the breakthrough concept that brought Nolan back to life. In the background of all three is Norman Bates mother, the hidden star of Hitchcock’s “Psycho.” Good mom / bad Mom, which will be which in this story?

Mamoudou Athie uncorks a great dramatic performance in the midst of his current comedy hit, Emmy nominated TV mini-series “Oh Jerome, No.” He and Amanda Christine, playing his 10-year-old daughter Ava, shoulder most of the heavy lifting in this twisty thriller. Tosin Morohunfola rounds out the trio as Dr. Gary, Nolan’s sounding board for the audience, an anchor that helps us see what is real and what may be something else. The classic Blumhouse power trio is in place.

The redoubtable Phylicia Rashad enters the story as mother familiaris, the pioneering Dr. Lillian, a black woman in the mold of “Hidden Figures.” She hypnotizes Nolan in the midst of a wonderful set of low-tech flashing, streaming light bars pulled from the Blumhouse special effects econo-toolkit. Her brain wave machine restores life to clinically dead craniums as she skillfully reunites survivors stripped of their identities with their former lives. She is a loving mother, combining compassion for people with her passion for technology.

As in other amnesia / associative disorder tales, the first half of the film is devoted to describing Nolan’s life without memories. Accurately and succinctly done, as Nolan slowly regains his sense of identity. Unexplained consequences creep in as the tension nicely ratchets up. Everything may be fine, or something may be terribly wrong. It is hard to tell when there is no memory, no basis to gauge reality. The viewer is left to form their own conclusions which are, of course, wrong.

In the midst of all this, enter the mental monster. Played to the hilt by Twisty Troy James, complete with joint cracking soundtrack, the film makers flirt dangerously with over-the-top campdom. Never fear, in the end father and daughter bring home the bacon. With a little help from Mom the monster is defeated, Except, wait, is that a bit of light left in that computer chip? Stay tuned for the sequel.