An attack out of nowhere leaves a young woman barely alive. Her attacker is dead, at least dead as far as we know. Thirty years later, she tells her daughter, “He is dead, but not gone.” The stage is set for intercontinental mother-daughter bonding-bondage in New Orleans and India, a one-world community of the possessed. Think “spirits without borders.”

Featuring an entirely Indian cast, Bollywood it is not, thank goodness. With nary a song or dance to lighten the setting, there are only the ghosts of the past. Unfriendly ghosts at that.

The heavy lifting is ably handled by Sarita Choudhury. Thirty years after her 1991 splash co-starring opposite Denzel Washington in “Mississippi Masala,” she sports a nicely bloated mug, a face embalmed before its time. A foil for the younger characters, in the real world she is wise to the ways of the underworld as well as Hollywood. In keeping with the millennial tone of the screenplay, her analysis of astrological charts is more like a DNA comparison than necromancy.

Her daughter is the vivacious Sunita Mani, who brings a sparkling presence to the screen. She is the millennial citizen of the world, above the superstitions of the old country, liberated in every way and half undressed in half her scenes. If her simmering body is intended to make up for the lukewarm screenplay, it did not work.

The men in the film are ciphers, the father dissing astrology, the art of divination by the signs of the universe, in favor of science (whatever that is). The ex and current lovers are feckless at best and downright psychotic at worst. “How far would you go to protect your daughter, wife, sister, pet, car or toaster” ripples through the Amazon/Blumhouse series. Hopefully, after the last of these they will move on to new ground. We already know the endings.

The cinematography is clear and simple with no tricks, at least nothing considered tricky in the present day digital universe. Production cash is focused on getting across the basic story, featuring the best actors for the longest and unabashedly using the younger ones as sexy clothes horses.

The most glaring absence is of, well, craziness. There is too much Disney “Sorcerer’s Apprentice” and too little Hitchcock “Psycho.” Even a little Tarantino, like the accidental overdose in “Pulp Fiction” might get this movie into the scary range. Such is not to be. Broad commercial appeal and accessibility have their price. As reliable as an Amazon coffee shipment, this flick is no more interesting. 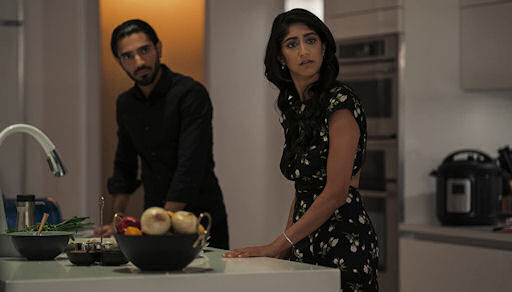