The greatest thing about “BlacKkKlansman” is Spike Lee’s totally manifested, constructive genius. Based on the true story of Ron Stallworth’s infiltration into the KKK in 1978-79, his film shows the fluidity, through time, of racist hegemony in the US. But America, we are on a path to getting better.

That’s what I loved the most about “BlacKkKlansman.” When the white police officers tell their first black colleague on the Colorado Springs Police Force, Ron Stallworth, that all their heroes are black, it is the beginning of their acceptance. Then they join together on Stallworth’s plan that puts the black rookie in charge of a gutsy infiltration into the KKK. Stallworth (John David Washington) will be the telephone voice. His white partner, Flip (Adam Driver), will play him out in the field.

Lee took Stallworth’s published memoir and used it as a window to frame the history of racism in America since the Civil War. The writing is brilliant. Harry Bellefonte, in a dignified cameo, describes the 1916 vigilante murder of Jesse Washington, a mentally disabled 17-year old black youth. In juxtaposition are cuts from the 1915 movie “Birth of a Nation,” which depicts the Ku Klux Klan as heroes.

Acting by a true ensemble cast was flawless. Washington, Denzel Washington’s son in real life, plays an understated Stallworth who is just trying to find a place for himself on the police force. Topher Grace, playing a friendly, charismatic David Duke, becomes the man. Both were personally requested to take these parts by Spike Lee.

While Stallworth was allowed to infiltrate the KKK, he was also asked to monitor Stokely Carmichael’s rally in Colorado Springs as well as the Black Student Power movement. Adding interest to the story is his conflicted romance with the president of the student movement.

When asked how true to life the film ended up to be, the real Ron Stallworth says it’s pretty close. Not much can be said about the real police officer who proxied for Stallworth because of a still present fear of retaliation. In real life, there was no bombing and the romance, Stallworth says, was more of a composite. But the incredible story, based on records Stallworth kept, is true and Spike Lee deserves applause for bringing it to the screen.

Lee makes sure, by the way, that the viewer notices the KKK chant, “America First” and its link to Trump’s rallies.

The debut of “BlacKkKlansman” at Cannes this year brought Lee the Grand Prix. Nominated by the Golden Globes for Best Picture, Best Director, Best Actor (Washington) and Best Supporting Actor (Driver), this is an important, brilliant, and even hopeful film. 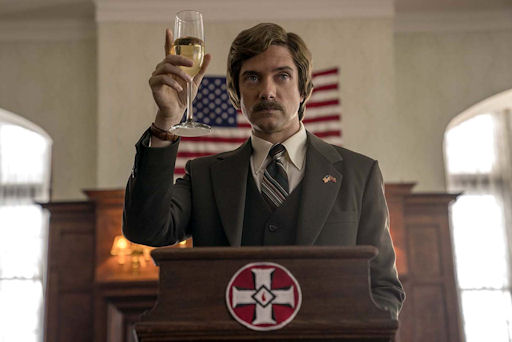