The nominees for the Critic’s Choice Awards include a Netflix US-Mexican production in eight categories, including best motion picture and best foreign language film as well as best director, best screenplay and best actress. But is “Roma” really qualified for this amazing catapult into multiple awards consideration?

“Roma,” a black-and-white film set in Colonia Roma, a neighborhood in Mexico City in the ‘70s, has been called “exquisite” and “rapturously beautiful.” Vanity Fair’s Richard Lawson has called in “a personal masterpiece told on a massive scale.”

I wonder, scratching my head, “Did we even see the same movie?”

Granted, “Roma” is a fine film based on the early life of writer/directorAlfonso Cuarón, from when his parents got a divorce. The life of the family’s caring Mixtec maid, Cleo (Yalitza Aparicio), is juxtaposed with the irresponsible, privileged existence of her employers (the Cuaróns). But it also has odd moments, like when Cleo’s bad-choice-of-a-boyfriend grabs a shower curtain pole and uses it as a bo staff to perform a pre-coital, in-the-nude, crisp karate kata.

The biggest problem for me is that “Roma” does not begin to compare with other virtually ignored films exploring tough problems. For example, there is the addiction issue in “Ben is Back,” and the homeless veterans’ issue in “Leave No Trace.” Furthermore, it is not as artistically composed or as richly storied as other foreign films based on true stories like “Memoir of War,” about a woman trying to save her captured husband, “Lou Andreas-Salomé,” about the love interest of Friedrich Nietzsche, or “The Testament,” about the search for a mass grave in Austria.

I have a theory about why “Roma” has surfaced to the top of the nomination heap. Since the awards are competitive, there needs to be a certain amount of energy, advertisement, campaigning and arm-twisting to even get a film viewed (or recommended) by the 7,000 busy members of The Academy of Motion Picture Arts and Sciences who are allowed to vote. Only directors vote for Best Director, actors for Best Actor, and so on. So the winnowing process to be a nominee becomes a competitive industry in itself.

Perhaps the rise of “Roma” is primarily due to the hard-working awards-campaign staff Netflix hired to promote its films. Julie Fontaine, head of Netflix motion-picture publicity, has been working with Oscar strategists Cynthia Swartz and Lisa Taback to get “Roma” in position.

The bottom line is that “Roma” is okay, but it doesn’t promote the wrenching empathy or gripping story like other films that were entirely passed over this season. It seems to me that money financing awards campaigns could be compromising the entire award process. 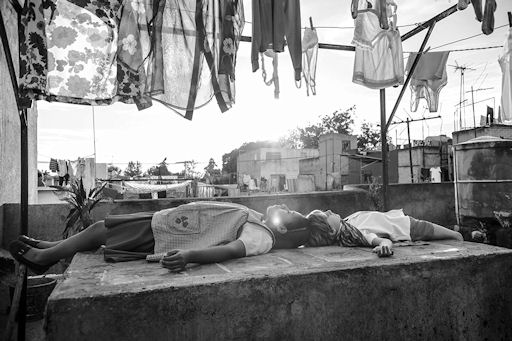