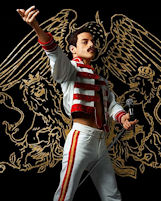 I wasn’t prepared to be impacted by this rock bio — but from the beginning, as wiry Freddie Mercury walks out on stage with his band, Queen, and sings, “Can anybody find me somebody to love?,” his four-octave vocal range, his energy, his physicality and his sheer talent hypnotize.

Featured on “A Night at the Opera,” Queen’s 1975 album, “Bohemian Rhapsody” is evolved, wondrous, musical genius. Mercury first plays it in the film while lying with his girlfriend underneath a piano –- twisting his hands in impossible ways to clink out the tune. As Mercury says of the album, “It is a rock n roll album with the pathos of Shakespeare.” And I add, “Rhapsody” is the convoluted tragic Shakespearean story of his life.

The recurrent themes of escaping, wanting love, rejection and nothing mattering in his lyrics are reflected in his life, Hearing the background music in his flat from the opera “Madame Butterfly” early on in this gorgeously choreographed biopic, we know the man suffers and tragedy is foreshadowed.

Born with buck teeth and four rather than two incisors, Freddie was a freak with compensating chutzpa. He was in love with his own ideas, his virtuoso singing range and his energy. He identified as an entertainer -– a circus freak wearing tights.

To add to his story, the screenplay flows with revealing dialogue, letting us know that Freddie was born in Zanzibar of Zoroastrian parents and later lived in India. It wasn’t’ until he was 17 that the family moved to London. By age 24, he joined up with the band that would soon become Queen.

Rami Malek, of Egyptian origin, uncannily captures all of Freddie Mercury through his moments of despair, rejection, adulation, lust, honesty and playfulness. His performance is a perfect capture and deserves the award nomination attention. The music of Queen, perfectly mimed by the band actors, brilliantly carries the film to glory.

Nominated for Best Film by The Golden Globes, “Bohemian Rhapsody” is a sure-pleaser. 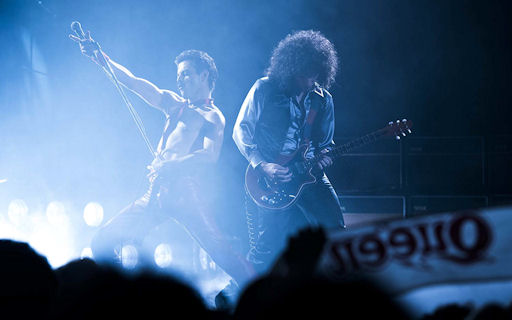