At last, the perfect balance of humor, inspiration, fabulous acting, and enthralling story. It’s a 10/10 movie sure to please everyone during the holidays. 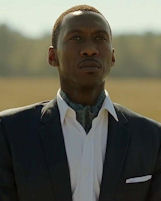 Beginning at the Copacabana Nightclub in 1962, Bobby Rydell is singing “Old Black Magic.” There is an altercation and the bouncer, Frank “Tony Lip” Vallelonga, played to full, Bronx perfection by Viggo Mortensen, takes care of it with a near-kill of the culprit. He shows his street-smart cleverness, making a few bucks out of it on the side.

We think Tony Lip is a crude brute with over-zealous testosterone. As the steel-eyed Italian gangster-type arrives home we worry about the safety of his family. His temper is too volatile for comfort. Two black men are working on fixing something in the kitchen and his wife is giving them glasses of lemonade, which they gratefully accept. As they leave the apartment, Vallelonga, aka Tony Lip because he can out-powertalk anyone, checks out their glasses and puts them in a garbage can, as if he’s tossing spoiled fish.

Due to the rout and perhaps other scheduled commitments, the Copa closes for two months of renovations. How will the under-educated Lip pay the rent?

Enter African-American Dr. Don Shirley (played with superb majesty by Mahershala Ali). He needs a chauffeur for his musical tour through the segregated deep south. Tony Lip is strapped for cash. He’s handed The Green Book, containing a list of all the places African-Americans can stay while traveling down south, and the adventure begins. Their goal is to make it back home safely in two months so that Tony can celebrate Christmas Eve with his family.

Inspired by the true story, the screenplay was written by Tony Lip’s son, Nick Vallelonga, with Brian Hayes Currie and filmmaker Peter Farrelly. Together, the writers resurrect the career of Dr. Don Shirley, 1927-2013, a phenomenal Jamaican-American concert piano protégé who earned three doctorates, spoke eight languages fluently and studied in Russia, and had an improbable relationship with Vallelonga.

This is your Winter Break show for the whole family. Nominated by The Golden Globes for five awards, including Best Movie (comedy or musical category), Best Director, Best Actor, and Best Supporting Actor, this is a sure-pleaser for everyone.