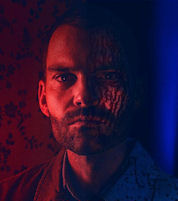 Seann William Scott (“Goon” and “American Pie”) tries something different, of the raging slasher persuasion, in this fun-loving flick from Blumhouse. Director Henry Jacobson teams up with perennial producer/disruptor Jason Blum and co-producer Derek Bishe’ to produce a routine review of throaty blood spurting that has a lurking hint of camp spirit. Scott character Evan can barely keep the laugh at bay long enough for the camera to cut to the slashed throat prosthetic.

Anyone who has seen Bishe’s luchador wrestling back alley organ harvesting feature “Lowlife” knows this guy can travel to places few others have been, or would want to go. Jason Blum was nominated for the Big “O” last year for “Get Out” as so can splurge for at least the state-of-the-art in blood spurting mechanisms and editing. This film makes good use of both the bizarre and the straightforward by featuring upright family man and high school counselor Evan who simply must do the right thing, even under the most extraordinary of executions.

As one might imagine, Scott is no Anthony Perkins, despite the sexy shower slasher scene. The best he can do is go Clint Eastwood and keep a stoic expression as he goes about his business. In this way the plot carries us along thinking the character is hiding his feelings when the actor is not giving him any feelings to begin with.

Anyway, the movie works. Much credit for that goes to the inclusion of Evan’s mom Marie, perfectly played by veteran Dale Dickey (“Hell or High Water,” “Winter’s Bone”). If there is anything better than a whacko serial killer on a rampage, it is his mom urging him on from the background. This plays such delightful games with taboo stereotypes that the audience cannot help but laugh and cry at the same time. The character Marie, a combination of Hannibal Lector and Michael Myers, looks like she has been killed and brought back to life. Which, in a way, is exactly what happened. The root source of the evil is domestic abuse, and the evil karma just keeps coming back. Thank goodness.

Everything is going fine, Evan’s wife is quite liberal letting her husband go out at all hours of the night, even with the news of all those disappearances, until detective Overstreet (Kevin Carroll) arrives on the scene. Little more than a cipher, Overstreet gets things off dead center. When wider suspicions arise, well, things must be done.

The mysteriously vacant white mansion that is Evan’s own private killing castle is a mistake. There is no explanation for it, other than, probably, it was available as a cheap set (or free). The victims are unimaginative and we do not get sufficiently involved with their miscarriages of decency to be thrilled by their deaths. Even so, this is a great first venture into the dark side for Scott.