This masterpiece of stripped down tension is even more beautiful for what it is not. Presenting the exact opposite of an ensemble cast, the story is told in the mind and ears of a single person, Asger Holm, who may well be going insane. The viewer must decide what is truth, what is lies and what is completely in the imagination of the unfortunate, over-stressed avenger.

With only one day to go in a forced desk job suspension, action-oriented type-A Asger cannot wait to get back on the mean streets. A SWAT team kind of guy, more comfortable kicking down doors than chatting on the phone, he is stuck at the emergency call center trying to be patient with every dimension of absurdity that comes his way.

One thing he cannot abide is bureaucratic dithering. Action is everything, the truth is right there in front of your eyes. Just do it. After a few non-starters, he gets a call that perks up his ears (and ours, too). A little girl reports a knock-down drag-out between her parents followed by her dad dragging her mom out of the apartment, into the car, and away. A few scenes later, Asger is fighting for action and quarter-backing the plan over the phone.

Starting from this excellent foundation, the illusion of the immutable truth and good-Samaritan/hero, writer/director Gustav Möller (co-written with Emil Nygaard Albertsen) takes us on a ride through a house of mirrors we will not soon forget.

Voices come and go over the phone, while Asger’s fellow workers in the emergency call center look at him with increasing curiosity, then alarm. His former boss on the force calls, from what seems like outer space, and re-assures him that everything will be fine after the hearing the next day. There has been an accidental police shooting, but the story is clear. That is, clear enough to get back Asger his car and gun and get him back in the faces of the bad guys where he can do what needs to be done.

His partner, Rashid, calls, and reluctantly agrees to join the emergency phone intervention. Rashid is burned out, we can tell it clearly from his voice without even seeing him (if there is an Oscar for voice direction, director Möller gets it for this flick). The alarm comes when we consider that the burned out Rashid may be the one who is rational and his partner the one who is delusional. Either way, if the callers are lying, or telling a false truth that they do not know is a lie, it amounts to the same thing.

Henckel von Donnersmarck warned in his Oscar winning “Lives of others” how dangerous it is to interpret eavesdropped conversations. This film combines that powerful creepiness with Gene Hackman’s sweat-popping, brain-bursting tension in Francis Ford Coppola’s triple Oscar nominated “The Conversation.” This movie is as good as either one of those, and maybe both combined.

As Jack Nicholson told us in “Chinatown,” there is nothing worse than trying to help someone and hurting them instead. The scary part is that we seldom know the difference until it is too late. 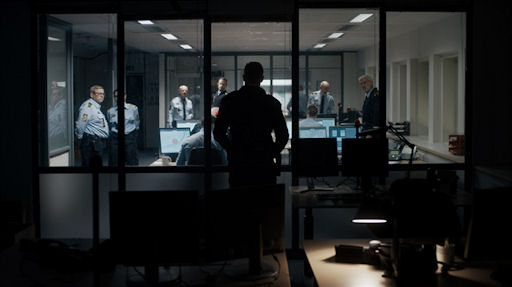