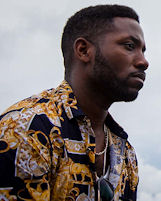 A movie named after the famous internet scam has a lot to live up to. The “Nigerian prince” scam promised a huge cash reward for helping a foreign national out of a paperwork problem. The victim is then robbed of money, identity, or both. The scam has been used so many times it satirizes itself and so was ripe for a good harpooning. Despite a good lead line looking for a punchline, the message of this film is muddled. It wobbles between a coming of age story and a comedy and never makes it to home plate either way.

American actors Chinaza Uche and Antonio Bell play Pius and Eze. Eze is sent to Nigeria by his well-off parents to experience his roots. These roots include relation Pius, a small time scammer on the verge of getting in over his head. The plot is a combination of dozens of American movie tropes, some of which have resulted in powerful performances and multiple awards. In some, the scammer realizes his sins and does the right thing. In others the two go down in flames.

Antonio does a good job playing the spoiled teen who does not get the picture. Unfortunately, that is all he plays. Chinaza comes out of the gate like Kevin Spacey in “Casino Jack” but wobbles in the home stretch. He is simply not funny enough to make this a comedy, nor is the screenplay tragic enough to show a powerful demise.

Although the plot is weak and the acting disjointed, the film does provide interesting insights into modern day Nigeria. Set in Lagos, once voted the least livable city in the world, the African asphalt jungle has plenty of juicy potential. Corrupt cops have the power and mentality to do things that American cops have not yet approached. This makes things difficult for film-maker Faraday Okoro (co-written with Andrew Long). There is so much potential content in either the Lagos inner-city insights or the ridiculous Nigerian prince scam that Okoro cannot decide which way to go. He is caught between Robert De Niro and Eddie Murphy.

Women are strong role models in the screenplay, being the consciences of the male leads. Sending a teen to his long lost native land to find himself is a questionable but well intentioned idea but his strong and practical Nigerian aunt anchors the good side. As it turns out, life in modern Africa is not all that much different than life in America. It is always up to the person to tell right from wrong. The plot is simplistic and over-used, so it is up to the actors to use that framework to tell a compelling personal story. This simply does not come across.

All scams, especially the overused ones, have a comedic side. If comedy and coming-of-age is the goal, the plot needs to steer clear of the bloody reality of street violence and organized crime. If the goal is insights into the social morass of the mean streets, that is no place for hijinks.