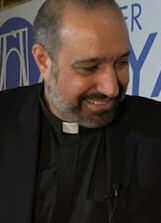 A normal guy with a pastor’s collar is walking on a Brooklyn street in New York City. We hear him greet a passer-by, “Wa alaykumu as-salam. My name is Khader El-Yateem, a candidate for City Council.”

How El-Yateem got to this sidewalk is actually more fascinating than his run for office. Born in Bethlehem, Khader was an innocent 19-year old theology student when Israeli police raided his house, roused him from bed, and locked him in prison. Never told why he was arrested, Khader was beaten, tortured, and kept in solitary confinement for 57 days. He was not allowed to shower and he grew close to death.

His brother-in-law, an international lawyer, was able to get him released. He continued his studies and in 1992 he was ordered by the Lutheran Bishop of Jerusalem to establish a Lutheran church in Brooklyn to minister to Arab immigrants there.
The entire unlikely story of Khader and his beliefs for peace and justice is woven through this excellent documentary of his run for NYC Council.

Directed, produced, filmed and edited by Ahmed Mansour, “Brooklyn Inshallah” bridges a cultural divide in America by showing Arab-Americans singing the Lutheran liturgy and favorite Lutheran hymns in Arabic. This embrace and synthesis of cultures forces us to do a double-take. It looks like there’s more in common between North Dakota and Brooklyn than we might have thought.

With a stirring troika of progressive minds, the producers behind this insightful film bring a frankness to the Arab-American situation. Paul Costello, executive producer, is a veteran of peace-making programs for emerging leaders in Israel and Palestine. He is flanked by Sarah Friedland, co-producer, who is a Jewish documentary filmmaker based in Bay Ridge, and Seth Morrison, outreach producer, who is a Jewish activist focused on Palestinian human rights and on the national board of Jewish Voice for Peace.

The director, producer, editor, and cinematographer, Ahmed Mansour, is a New York-based filmmaker, having graduated from the NYU Journalism Institute. Born in a refugee camp in the Gaza Strip, he has made a series of films focusing on the humanitarian crisis there.

The enduring strength of the community behind El-Kateem belies a foundational desire for respect and acceptance of the middle-eastern descendants in America. Especially poignant is the day before the election, Sept. 11th. Ceremonies are conducted eulogizing 911, but some of the Arab-Americans are too scared to attend. But El-Kateem goes to the night ceremony and feels the pain of the attack deeply. It not only killed 2,977 innocent people, it also tilted his neighbors, his city and his nation against his family and his community.

“Brooklyn Inshallah” is a not-to-be-missed doc at this year’s Doc NYC film festival.