Review: On the Inside of a Military Dictatorship

By the very nature of dictatorships and military regimes, documentaries about them are rare. This riveting film about the leadership, and humanitarian crisis, of Myanmar is a good example of the genre. Director Karen Stokkendal Poulsen works within strictly defined borders because to ask the wrong questions or to hammer sensitive areas is lethal. The power brokers have killed before and they will kill again.

Despite that, there is a message in the telling. Nobel Peace Prize laureate Aung San Suu Kyi may be the most famous, and controversial, leader in the world. Her father was the founding general of the Myanmar (former Burmese) army when the country won independence from the British. He was assassinated and the country has been under military leadership ever since. Suu Kyi was imprisoned for years for fighting for democracy while the country languished under crippling international sanctions. 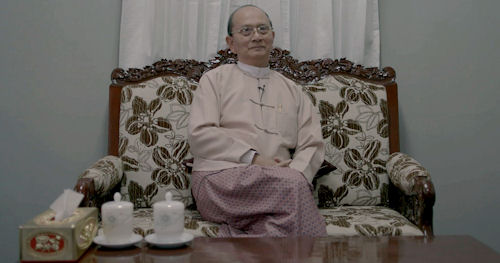 Her release led to her seemingly miraculous ascendency to power in 2016 and a new beginning for a country that had become a pariah. She was going to make it all right, bring goodness and light to a power mad and greedy military dictatorship and open the country to the world. She did not do that, as we all know. This movie is not the story of what she failed to do, it is a spell binding look at how a clever cadre of leaders took a world hero and turned her into their tool.

Once heralded as the Mother Teresa of democracy, Suu Kyi fell from grace in the wake of the Rohingya genocide beginning two years ago and has been withdrawn since. The lure of this film is the promise of an inside look at her involvement in the genocide and what she did, or did not, do to prevent it. There is also the promise of divulging her status with the military government and the status of national democracy.

Sadly, but not surprisingly, none of this is splashed on the silver screen. Although we get a strong background and one of the best pictures to date of Suu Kyi, the real story is how we could have been so wrong, and how there is still some hope.

Bluntly honest throughout the movie, Suu Kyi said the most important thing in the most direct way. She said she was a politician, and that was all. Reading between the lines and, yes, speculating, she did the best she could with the power she had. Most import of all, she stayed alive and may still lead the country into the free world.

It is easy for us in free countries to say she did not do enough, but after seeing this military machine at work it is possible to partially understand what she did, and why she did not do more. Her first job as savior of Myanmar is to stay alive to fight another day. The tragedy of yet another failed government is not hers alone, it is shared by all nations of the world. As it turns out, the freest and richest are the most culpable.