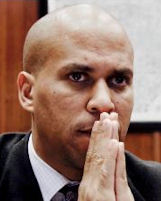 “We are modern day freedom fighters. We are the people that have to somehow rescue what we claim to stand for,” says Cory Booker in prescient rhetoric back when he was mayor of Newark, New Jersey.

“Cory in Brick City,” a cinema verité documentary, includes footage from the Peabody Award eleven-hour Sundance Series called “Brick City.” Filmed during 2008 to 2010 while Booker was Newark’s mayor (2006 to 2013), this film is a character study of a man who believes that the good can win.

Crucial in his initial success as mayor is his hiring of a Police Director, Garry McCarthy. Booker announces his “commitment to reduce violence and offer hope” through reforming the police department, an indomitable challenge.

“Cory in Brick City” film-makers Mark Benjamin and Marc Levin have remarkable access to footage documenting death threats, public anger, and police tension. Also, in the wake of the 2008 global economic crash, Booker faces a dramatic budget cut that threatens to not only topple his plans but ruin his progress.

Throughout, Booker must remain steady and remember who he is and what he believes in. While at a grocery store Booker’s assistant recognizes a woman, who is the sister of a woman with three kids who was recently murdered. Here’s the sequence:

“Cory’s assistant whispers in his ear. There is a couple crying nearby. Cory is on the phone with someone explaining the situation. CORY: One of the women that was murdered is a mother of three kids. Right now their sister is having to deal with the shock of this. I’m actually with them right now in the Supermarket. Cory speaks to the sister. CORY: God brought us together right now. So what’s going on — is there anything I can do? WOMAN: [indistinct] CORY: Alright, I’ll see you at the check out. Cory convenes with his guard. CORY: I wanna make sure we pay for their groceries. $250 for groceries that’s barely — that’s what I really want them to do. Just walk home happy. They’re gonna feed those 3 kids for a while.”

Now Booker is running for the Democratic presidential nomination. This film gives the sense that he is a hands-on, compulsive worker who has dedicated all his waking minutes to goals that are bigger than he is. He may be progressive and compassionate, but he is also strong on safe streets and a balanced budget.

Though he influences Jon Bon Jovi to invest in a condo project called Genesis and Mark Zuckerberg to gift $100 million to Newark Public Schools, he is told that there is a $64 million budget gap and Newark is losing another $40 million.

The budget biz is hard to follow as it confusedly threads through the film. Though there are cuts after cuts, the deficit just seems to loom higher and higher. But it’s the character of Cory Booker that transcends the problem and gives his community hope.

“Cory in Brick City” is opening at DOC NYC, the largest documentary film festival in the U.S. on Nov. 9. 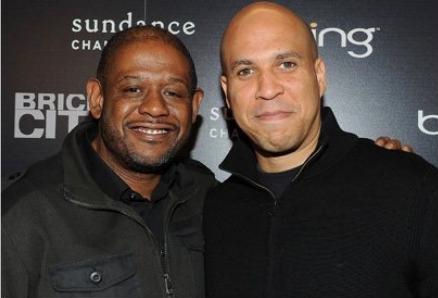