“Captain Phillips” is the biopic of Captain Richard Phillips, who was taken hostage by Somali pirates in 2009 on the Maersk Alabama. When I first saw this movie’s trailer a few months ago, I knew this was a screening I had to see. Tom Hanks is a great and versatile actor and after seeing “Cloud Atlas,” I was reminded of his acting skills and that was one of the reasons I was looking forward to this film. 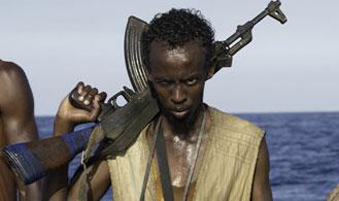 “Captain Phillips” starts with a background on Muse, a Somali pirate who is given orders to hijack a ship in order to get a big payday. We also get a look at Richard Phillips’ life as he prepares for the trip of a lifetime. “Captain Phillips” is effective in providing backgrounds for both the Pirates and Phillips, because it keeps your attention and provides an understanding of how the events occurred.

Initially, there were more pirates, but only four were dedicated to the mission and they were Muse (the captain), Bilal, Najee and Elmi. What these four did was incredible because they were all under the age of 18; however, during the course of the movie their age becomes a factor and they make critical mistakes. All four actors were great in their roles, but the performance given by Barkhad Abdi as Muse is bone-chilling. You can see just how scary it must have been for Phillips to been stuck in a lifeboat with these pirates.

As for Tom Hanks, he gives another stellar performance as Captain Phillips, a seasoned captain who made smart decisions that helped to keep all 20 members of his crew safe. Sadly, because of all the great performances this year, Hanks may not be up for any Oscars for this role, but, he makes us believe we were inside the lifeboat with him and when an actor can make you feel like you are right them with them, then those are the kinds of performances that deserve to be mentioned.

Besides the superb acting, the camera shots and visuals make the movie that much better because, once again, they put you right there in the action. The scary part about that is that these events actually happened which makes these components that much more effective, because you never knew what could happen next.

“Captain Phillips” is a film that everyone can enjoy. I believe it is a must see and I am giving it a rare 5/5 stars.