In this coming of age thriller — written and directed by Angie Wang — the character of Angie, played by Annie Q., is based on the real-life experiences of the writer/director when she was an incoming freshman at a prestigious southern California university. Coming from a disadvantaged background, her college opportunity is a thrill, but one tinged with fear.

Apparently, Angie and her father forgot, or ignored, the astronomical cost of tuition. Faced with bankrupting her father or dropping out in disgrace, she marshals her redoubtable street smarts, and considerable chemistry aptitude, and begins secretly compounding illegal street drugs in the college lab.

The filmmaker had the advantage of the ultimate in first-hand information, having lived the story. All that was left was to put it onto film. Not as easy said, as done. Although Annie Q. does a commendable job playing the street wise and ultra-smart Angie, the rest of the performances, and the rest of the screenplay, are choppy and rote. Having survived this harrowing experience, Wang yearns to bring her former life to the screen. Although this will be hard for her to imagine, what plays out is an all too common coming of age experience.

The character Angie’s horrific background, apparently including sexual assaults, flashes back and forth on the screen but is curiously blurred by her loving father’s attentions. She is a combination of both of these influences, as well as having grown up tough on the streets of New Jersey. Putting all this together is too much for Annie Q. in the lead and too much for Wang writing the screenplay. It simply does not play out as powerfully as it should.

Although Angie is smart enough to instantly grasp a fortune in the offing by making MDMA (Ecstasy), she is dumb enough to get in a screaming, lethal argument with her very connected dealer that blows the whole thing. Perhaps she was trapped, but the story does not make that clear. If the point was to make money it is even less clear how she decided to go to the expensive school (Stanford, as reported) in the first place. When a good friend notices her talent and offers to get her a job with Squibb, she refuses, but without any explanation.

Considering countless students have been in the same situation and found more prosaic solutions, it is hard for the viewer to get solidly behind Angie’s way of doing things. She does not have the hubris to be a satisfying fallen hero, nor does she evoke the sympathy to be a tragic victim.

Jeanine (Francesca Eastwood) plays her roommate, the poor little rich girl with the psychopathic mom. Angie joins a Big Sister program and befriends the ghetto child Bree, but neither of these potentially powerful agents are fully brought into play to explain what makes Angie tick. Scenes of unabashed decadence of Roman proportions on Southern California campus environs make us all want to go back to school. Taking our present-day caution with us, of course. 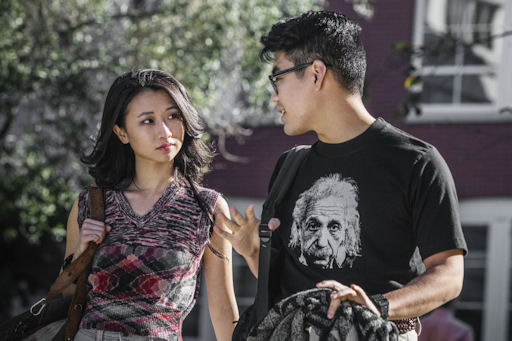