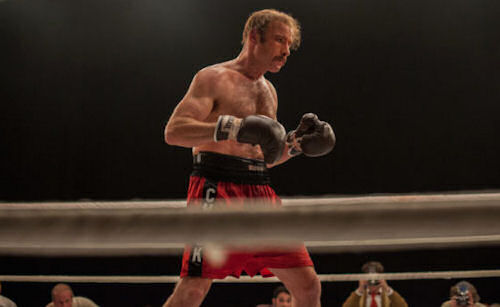 Nobody who saw director Philippe Falardeau’s award winning “Monsieur Lazhar” in 2011 would have imagined this. “Lazhar” was followed by two more touchy-feely up close and personal films about unique immigrant experiences. “Chuck,” which premiered at NYC’s 2017 Tribeca Film Festival, is the polar opposite.

Born and bred in New Jersey, Chuck Wepner — aka the “Bayonne Bleeder” — had a preternatural ability to take a punch. He was not that good at dodging or delivering them, and he was anything but Muhammad Ali’s gym rat. But he stayed standing when anybody else would have fallen. His weakness was a tendency to bleed above the eyes, a fatal flaw for a professional where blood in the eye spells the end of the fight. It is an automatic TKO.

Despite this, Wepner won more than he lost in New Jersey and got the ultimate shot at the big time, a fight with world champion Ali. A liquor salesman barely making ends meet, he could have parleyed his fight with Ali into a house, a book, speaking engagements and a better job. As the story is told, he did some of this in later life, but in the meantime he imploded into a rock star meltdown that is one of New Jersey’s finest.

The story ended well enough for Wepner. He survived, remarried and apparently reconciled with loved ones. The setting of the movie, and Liev Schreiber in the lead, are what make “Chuck” a beautiful piece of work.

Anybody who is from the New Jersey side of New York Harbor— Bayonne, Jersey City, Hoboken, Secaucus, Elizabeth — knows there is something special about the place. It has a tremendous sense of the rust belt about it, a huge sense that the best times have past, mixed with an even bigger sense of pride and belonging. The folks who are still there are there because they care. Gentrification is creeping in, but very slowly. The area is still just rough enough that the NYC rich take the apartments on the water and leave the hinterlands to the locals. That is just the way they like it.

Growing up on the tough streets of Manhattan, back when there really were tough streets, Schreiber had a short walk to Bayonne. As much as they dislike each other, the communities on either side of the Hudson have a lot in common. They are short on small talk and strangers do not show up on their radar. Who you grew up with and who you are loyal to are what count. Nothing else much matters. Although there is little new about the role or the plot, Schreiber absolutely knocks it dead. He is riveting to watch and he brings just enough of that warm glow of nostalgia to make it fun. There is melodrama and pity lurking at every turn, but he shucks and dodges and keeps the attitude straight on. Chuck did it his way.

Elisabeth Moss plays Chuck’s first wife and mother of his daughter, Phyliss. Since her smashing role in “Mad Men” she has been looking for a breakout performance and this may be it. Although both she and Schreiber are accomplished, this film may be their best performances yet.