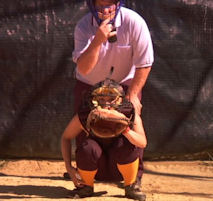 Despite the inevitable issues that families face, many people would say they can always turn to their mother, their father, their siblings for support. For Hannah (Lori Martini), the protagonist at the heart of the short film “Caught,” this isn’t the case.

“Caught” follows Hannah and the family drama she has endured since childhood, alternating between flashbacks and a present-day softball game as Hannah’s struggles come to a head on the ball field.

Since she was a young girl, Hannah’s mother (Catherine Curtin) has always favored Hannah’s brother, Robbie (Daniel Braver). While Hannah always strives to do the right thing and live honestly, Robbie is a schemer who will do anything to make a quick buck, including taking advantage of Hannah’s kindness.

Softball has always been Hannah’s safe haven, a place where she feels joy and appreciation. And when she realizes the full extent of her family’s disrespect during a heated game between her team and Robbie’s team, Hannah must decide if she can find the strength to move on with her life.

“Caught” is a gripping family drama, grounded in the performances of Martini as present-day Hannah and Anne Stevens Koloski as young Hannah. She’s such a sympathetic character, and my heart ached for her as her family never fully appreciated what a kind person she is, no matter how hard she tries.

The story structure is creative and holds the audience’s attention, glimpses of Hannah’s past running parallel to the drama unfolding on the ball field. You root for Hannah to succeed in her life and much as you root for her on the field.

The film also shines in its subtle storytelling, particularly in the movie’s final scene. It’s left up to the audience what Hannah’s next move is after she learns the full extent of her brother’s betrayal. But much like her victory in the softball game, I have faith that Hannah will ultimately win in her life off the field, despite the challenges she’s faced.