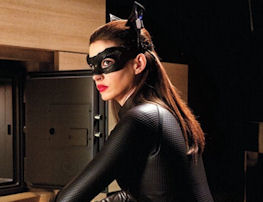 Until recently, we didn’t really know what our favorite cat burglar — Catwoman — would look like in the Batman movie sequel “The Dark Knight Rises.” But now we’ve got a various good images of the gorgeous starlet Anne Hathaway in her skin-tight Catwoman suit like the photo at right and the full-body image below.

Personally, I feel Hathaway looks fantastic in the outfit, which appears to be leather with great detail to it. It’s a drastic change from the Catwoman suit Halle Berry wore a few years back in her “Catwoman” movie, and has a less homemade feel to the Catwoman suit Michelle Pfeiffer donned in “Batman Returns.”

At first glance, I thought it was not a very original Catwoman outfit, since it immediately reminded me of Uma Thurman’s outfit in “The Avengers.” But, then I thought about it more, and it is a fantastic throwback to the beautiful Catwoman outfits Julie Newmar, Lee Meriwether and Eartha Kitt wore in the ’60s for the “Batman” TV show. Also, it is on par with the popular Hollywood trend of heroines (or villainess) in leather.

The mask seems to contradict previous rumors that her goggles would serve as her mask, while at the same time give the impression she has cat ears when she wears them over her hair. This only means she might have various Catwoman suits or looks in the movie. Or perhaps it evolves throughout the movie.

Also, if you have not seen the recent cover of Entertainment Weekly magazine featuring Batman and Catwoman, read our article about it and see the photo HERE.

In short, I must agree with all the sites claiming Anne Hathaway looks like a sexy bombshell in these photos. I have always loved her and most of her movies. She is talented — Nolan would not have cast her otherwise — but I hope this suit and the accessories do not hide one her best features: her amazingly beautiful eyes.

I, for one, am glad amidst Chris Nolan’s secrecy for his movies, we have been graced these fantastic peeks at the new Catwoman.

You will be able to see Catwoman — and Batman — in action when “The Dark Knight Rises” drops into theaters on July 20.