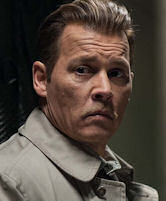 A gangsta rap artist dies in a hail of bullets after a late night all-out party in L.A. Not so amazing. A few days later, an undercover L.A. cop kills another undercover L.A. cop in an apparent road rage incident. That is a story, and city detective Russell Poole thinks the two are connected. Twenty years later, no one knows for sure but Johnny Depp is going to make sure we all give it some thought. This is the movie that is going start that thought. Maybe.

If you love Depp, you will love this movie as you have loved all his others. Otherwise, it is, sadly, too much too late. “Serpico” without Al Pacino and Sidney Lumet 50 years later is not going to make headlines. Still, the film plants a seed and Depp is instrumental in making that thought persist. Why would the L.A. law enforcement hierarchy cooperate in the death of one (or two) outlaw performers in the interest of others?

If this screenplay shed light on that, it would be a blockbuster of a movie. Of course, if such information existed we would have heard about it years ago. Perhaps there is more in the book. The absence of any concrete evidence pointing to a smoking gun in anybody’s hand is consistent with the FBI’s opening and closing of a subsequent investigation of their own. Russell Poole’s work, and the man himself, were discredited. It is Johnny Depp doing discredited so well that makes this film worth watching.

Director Brad Furman plays it safe and lets the story tell itself, such as it is. Oscar winner Forest Whitaker presents promise in what could have been his co-starring role as star reporter Jack Jackson, but that was not to be. As there is little story to be told, the character did not come to the fore and the man who terrified us as Idi Amin turns into a footnote instead of a catalyst.

The screenplay by Christian Contreras (based on the novel “Labyrinth” by Randall Sullivan) weaves back and forth between semi-pro baseball and the troubled world of detective Poole. Life at the LAPD is turning into more of a game than a job and Poole has a perpetual two strikes. Contreras’ screenplay doubles down on Depp’s seething talent for playing self-doubt and just plain insanity, his character’s inability to enjoy a simple life being both a gift and an albatross.

Good supporting performances keep up the tension – chief among them Shea Whigham as officer Frank Lyga, the road rage shooter in the opening scenes. His performance is critical in making the decision to believe or disbelieve Poole and he never shows his hand while seemingly on the edge of hysteria. For more of his fantastic supporting work, watch a couple seasons of “Boardwalk Empire” with him and screen brother Steve Buscemi practically flying off the screen.

Emerging lenser Monika Lenczewska does a fine job showing the mean streets but the equally important newsroom scenes with Whitaker fall flat. Even so, Johnny Depp’s work carries the day and keeps things tense from start to finish, even if the finish is not the locked-up climax we might have liked.