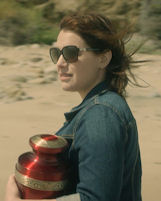 Debut writer/director Alex Goldberg comes out swinging in this remarkably well put together second effort. The star of the film is Los Angeles and the film maker strips it naked without judgment or sentimentality. A young cast and crew anchor a drama about the youngest city in the world, emotionally if not demographically. Some people go there to get famous; some go there to get lost.

Catia Ojeda does the heavy lifting as Nina. Just off the boat from the Mid-west, Nina has parachuted into L.A. to inform her estranged sister of their mother’s recent death and to do something appropriate with Mom’s ashes. Consistent with the search-for-the-lost-person trope, Nina runs into a host of eccentric, adrift and dangerous persons who represent the faces of the city. The most prominent advice is to go back to Kansas, but, of course, there is no turning back.

Nina’s character is not fully formed and has limited dimension. On the other hand, the film maker did well in what he did. The real story is not about Nina, but assumptions people make about loved ones. Mainly, the assumption that they love them back and given that love, everything will be OK. Coming off her own failed relationship, Nina looks to the city for comfort and finds nothing there. Although, just as Dorothy from Kansas found nothing in Oz, she found everything.

Delivering a powerful helping of faceless America, Los Angeles is used as a pallet containing everything that is good and bad about the USA. The freest country in the world is also the most vacant and helpless, although some people, for their own reasons, seem to like it that way. Nina’s string of interactions are reactions to the alienation caused by technology, money and unbridled liberalism. Actions fall short of stated intentions again and again, eventually leading Nina to the truth about life and herself. The closure she gets may not be the closure she wanted, but it turns out to be the closure she needed.

Providing exposure to a dozen emerging actors, Goldberg builds up a nice tension as Nina closes in on her sister and treads increasingly dangerous ground. All honorable performances, but most likely only a hint of things to come. As the temperature rises, the end of her parade of personalities climaxes with a stunning meeting with The Superior. Perfectly played by veteran Dee Wallace, The Superior delivers a lesson to Nina she will not soon forget. Oz meets the Brave New World.

Jamie Christopherson from the sound department of the uber-L.A. film series “Ray Donovan” hammers out a fine noir soundtrack of west coast jazz and blues. Like the city, this movie has everything and it has nothing. Whimsey, danger, dreams and destitution, bad decisions lead to good outcomes although we are never completely sure we are better off with what we have learned.