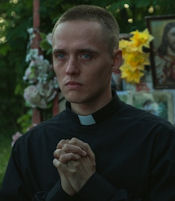 Director Jan Komasa got off to a solid start with his Cannes prize winning short “Nice To See You” in 2004. Since then, he has done three feature films. In this, his third, the edgy Bartosz Bielenia vibrates out of the screen in his first lead role. Scathing commentaries on the juvenile corrections system and the Catholic church are combined with teens cast as leaders of a new world. Although corrupt and muddled adults hold the reins of power, it is the youth who see the truth and are not afraid to tell it like it is.

Writer Mateusz Pacewicz won Best Screenplay for this work at this year’s Polish Film Festival. Daniel is released from juvenile prison but is told in no uncertain terms by the alpha gang leader that he will find him and exact revenge. Attending prison mass, Daniel takes to it, either as a refuge, or as an epiphany. This kind of uncertainty prevails throughout the film, and it is not a good thing. Although it shows the confusion, and trauma, that would be expected of a twenty-year-old, alone and abandoned as an ex-con, this is not a substitute for a plot.

Daniel’s alienation is amplified when the prison priest informs him that his past crime bars him from even attempting to train for the priesthood. This is fairly damning testimony considering countless biblical redemptions, and Catholic confession and forgiveness.

Three time Polish FF award winner cinematographer Piotr Sobocinski Jr. keeps it vague with fuzzy interior shots that look like they were taken in a smoky room. Exterior shots are simplistic, failing to combine the bigger picture with what is going on in the young man’s head. There is no complexity of movement, reflective or “window” shots. This hurts a movie that needs visual clarity to reflect Daniel’s insightful and truthful vision. The photography, editing and directing all contribute to the film’s overall unevenness. It seems as though the three craftsmen are just getting to know each other, and their crafts.

The supporting actors try their best but are kept in the background and this lessens their impact on Daniel. This is significant because Daniel’s entire story is his labelling by the world; a story with impact only in proportion to the vividness of those around him.

Having pointed out those failings, Bartosz Bielenia is fantastic. For a young actor practically in his debut, he shows great promise. He has a James Dean quality of confused and vulnerable but charismatic youth, combined with a glimmer of Johnny Depp craziness. It is exciting to think of what could happen with him and director Jan Komasa when they catch their stride.