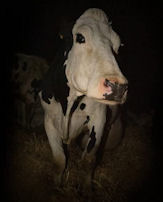 “Cow” takes place on a big, kindly run English farm. There is no narration. We are simply observers of the life of a particular black and white Holstein (I think) cow, number 1129. The film begins with the camera on her face. We have no idea from her calm demeanor that she is giving birth. Farm hands are pulling on a rope to help get the calf out. They cheer as the calf drops and then they quickly swing it around to mom who tenderly licks and nuzzles the new being laying on the clean, soft straw. The calf finally stands and wobbles to mom, finding her teats to nurse.

But we know that if mother cows were left to give all of their milk to their newborns the dairy business would be in a sorry state. So, it was no big surprise to see the farmhands divert the newborn with a giant bottle and gently whistle to the mom and lead her away to her milking stall. Cows, after all, can only produce milk for about 10 months after giving birth.

I’m not sure of time span shown in the film. I don’t know if the newborn is taken at that moment to a separate pen, but it seems that way. It is another nicely bedded straw area far away from Mom where a faux teat provides access to a full bin of milk.

Since there is no explanatory narration, I don’t know why, since the calf is getting milk anyway, it can’t get it directly from her mom. After milking, when the mother cow returns to her soft straw, empty of her new calf, she starts mooing. We suspect she is aggrieved because her newborn, who has a yellow tag now stapled to its ear, is missing. Mom seems to be in distress, as does the new calf in a stall a distance away.

One question I have is about Mom’s udder. It is mammoth. Even after being milked, she still has a billowing udder between her legs that makes walking a little tricky. Why does it look so full and bloated if she was just milked? Plus, wouldn’t there be excess in this giant sack for a new calf?

The jerky camera lets us know that the scenes are not orchestrated. The cinematographer is simply spontaneously following either the mother cow or her calf, alternately, trying to keep up with the action. The newborn calls out from its new location, just far enough from mom. There is plenty of clean straw and a lovely plastic igloo for shelter. A big can with faux udder dangles for the calf’s nourishment. But the calf still seems distressed.

It’s hard to know if I’m just anthropomorphizing. Do cows and baby calves grieve? Do they feel anxious or despondent at separation? Do they feel emotional pain?

Andrea Arnold is a famed director and winner of three Cannes Jury Prizes, a Bafta best film award and an Oscar Award for best live action film. She has created a stunningly honest look at the life of a cow on a humanely run farm, where cows have joyful access to rich green grass in the warm months and tidy straw beds in the barn during the winter. The farm crew is cheerful and soothing music with soft voices, including “Lovely,” sung gently by Billie Eilish and Khalid, is played during milking time.

A boomer generation baby, I was bottle-fed from birth. Milk goes on my cereal every morning. I have an affinity for cows. I have mucked out their stalls and watched my son milk them as if he were in a sacred space.

However, in seeing this story of a mother cow, without narration or explanation, I am doing some deep thinking. Filmed for over six years, Arnold has provided us a powerful commentary on dairy farming. I was educated about far more than I expected. Cows, by the way, can live up to 20 years, but this one that we’ve gotten to know in this film, does not.

A voice within tells me cows are animals whose very lives are in existence because of the product they create. In essence, they are living for humans. But as I gaze at the mother cow’s face in Arnold’s film, there seems to be something else, some bond I feel with universal life, where I can’t help but feel compassion and responsibility.

A film, especially for diary product lovers, “Cow” is one of those potentially transformative documentaries that we don’t forget. By the way, I’ve bought my first container of almond milk to pour over my cereal and mix with my coffee.