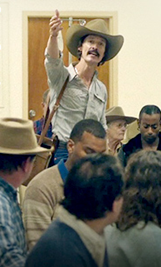 It is 1985 and the sexual expectations of freedom loving Americans are about to be turned one hundred and eighty degrees. The HIV virus hits gay males the hardest, intravenous drug users the second hardest and rodeo cowboys.

Rodeo cowboys contract HIV? Yep, some of them do, and unlucky Ron Woodroof was one of them. Inspired by true events, this film is his story. It is half a tale of dumb luck and half a story about standing up for one’s rights. Oh yes, there is that thing about not believing everything the government tells you. However, most viewers already know that.

The film is certainly not derivative. Directed by Jean-Marc Vallée (winner of Best Canadian Feature Film in 1985 for “C.R.A.Z.Y” at 1985 Toronto International FF) from an original screenplay by Craig Borten & Melisa Wallack (Wallack wrote the screen story for Julia Roberts’ 2012 “Mirror Mirror”), it is hard to imagine a more unlikely HIV patient than a rodeo cowboy. Having sex with an HIV positive woman in an environment of blood and open wounds (apparently Texas rodeo cowboys do this all the time) appears to do the trick. Do not try it at home.

Spirit Award winner Matthew McConaughey (Dallas in “Magic Mike” and Ward Jansen in “Paper Boy” with Nicole Kidman) does a good job playing Woodroof. He reportedly lost nearly forty pounds off an already slim frame to play an AIDs victim on his deathbed who is shooting himself up with experimental drugs in a Dallas airport restroom at the same time. Haggard, yes, he deserves an Oscar nomination for most haggard actor of 2013, if nothing else. Unfortunately, in the end, this limited screenplay will cut the legs out from under his hopes of winning much else.

After Woodruff discovers he is HIV positive, we are taken back to that terrible time when such cases were summarily informed they had thirty days to live. We know, in retrospect, that the main reason they lived only thirty days was that they were treated with doses of AZT that were too high for the bodies of the patients, many of which were in poor health to begin with. As luck would have it, Woodruff is denied AZT treatment, because it is only in the trial stage. Coming to the immediate conclusion that the government is killing its own citizens, he takes action.

His action is to import drugs that work to delay the effects of HIV and create a “buyers club” in Dallas. The club accepts membership fees and hands out the drugs free, avoiding criminal charges for selling non-approved drugs. From what we gather, this strategy saved thousands of lives while better treatments were being worked out. 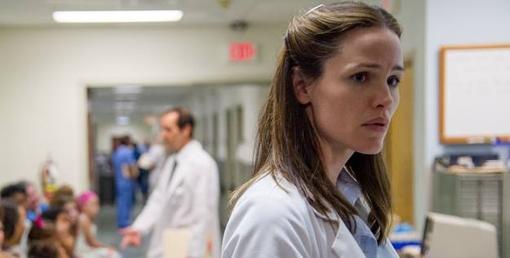 On the other side of the fence is Dr. Eve Saks (played by Screen Actors Guild Award winner Jennifer Garner). She is sympathetic, but bound to the dogma of the medical profession that forbids her to encourage treatments outside of the FDA’s circle. Thus, the stage is set — American cowboy individualism versus the establishment. A tried and true formula for success, it is only the novelty of the setting, with help from the acting and makeup, that pull this movie out of the depths of commercial mediocrity.

First there is Woodruff’s expulsion from his circle of buds when they learn he is HIV positive, and assume he is gay and therefore to be despised, beaten up and run out of the neighborhood. Times have changed since then, but it is good we are repeatedly reminded of that reprehensible reaction. It was shared by many at the time and has been permanently discredited since then.

Second, there is Woodruff’s unlikely ally in fellow AIDS patient Rayon (Gotham Independent Film Award winner Jared Leto, “Requiem for a Dream” and “Fight Club”), a transsexual who shares Ron’s lust for life. Immediate enemies, they team up to establish the buyer’s club. In the end, events intervene that break up their loving but doomed relationship. Another tragedy along the road to the eventual decriminalization of effect AIDs treatment.

A good look at HIV denial and the good that comes when someone decides they want to live, and help others to live at the same time. As the story goes, Woodruff was eventually taken to Federal court for his actions, but he prevailed. The film is mute about how the average citizen is supposed to tell when to break the law and when to follow it. It is also mute as to when to experiment with self-treatment and when to leave that to the doctors.

See the film and draw your own conclusions. In any event, there are life experiences in this movie that you will not see on ESPN rodeo TV. 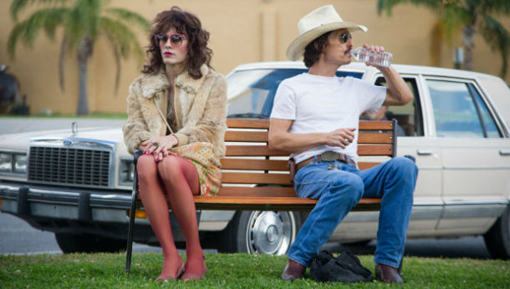