Just when you thought that the new campaign materials were coming to a close for Lionsgate’s “The Hunger Games: Catching Fire,” fans got an exclusive release online with a Subway TV spot featuring Christina Aguilera’s newest release for the official soundtrack, “We Remain.” 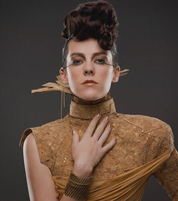 The song reveals an emotional video that is fully charged with a million different emotions at one time. As Aguilera sings what may be the movie’s anthem, several snippets of dialogue are heard that convey hope, desperation, sadness, loss, and just plain anger as Johanna Mason (Jena Malone), whom we see for the very first time in a tv spot, tells Katniss (Jennifer Lawrence) to “make ‘em pay for it”.

All the while, Peeta Mellark (Josh Hutcherson) tells Katniss that he understands why she did the things she did in the arena during their 74th Hunger Games as they enter into the Quarter Quell. The dramatic build up to the release is definitely keeping all fans on their toes.

Watch the following minute-long ad below and let us know what you think of the newest song release from the motion picture’s official soundtrack. Will you be purchasing the song to hear Christina Aguilera belt out those sultry tones over and over again telling us that no matter “what happens here we remain”?

“The Hunger Games: Catching Fire” is due in theaters on Nov. 22. Are you ready?