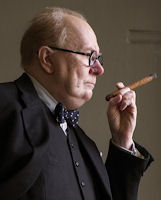 Gary Oldman comes out swinging as Winston Churchill in this period piece set during four weeks at the outset of World War II. A hard-drinking, cigar-smoking curmudgeon who bullies everyone in sight, he appears to have been put in a position nobody else wanted, that of the newly appointed, and marginally supported, British Prime Minister. With the entire British army stranded at Dunkirk and facing decimation, he is tasked with bucking powerful forces supporting the continued appeasement of Hitler in order to save thousands of lives.

“Darkest Hour” is also the story of an unlikely, and historically unique, alliance between King George VI (in an excellent performance by Ben Mendelsohn) and the prime minister. The king is befuddled by the hurricane of events that has overtaken Britain. Born and bred to defend the status quo and depend on the world status of his country, he is ill-equipped to handle what would become known as the blitzkrieg. The lightning war was not being played by traditional rules and it would take an unconventional, and controversial, leader to oppose it.

Joe Wright directs Oldman is a Golden Globe-nominated performance in this spectacular production. Unlike the hero we learned about in school, Churchill came to office with burdensome baggage. He was widely held responsible for the lethal debacle of Gallipoli, and this, coupled with his unbridled drinking and often out of control temper, placed him in a poor position to lead a country into 20th century war. Oldman packages this complex bundle into a character that fairly leaps out of the screen.

The movie has all the sets, costumes, action and violence of the war itself. The climactic scenes of Churchill’s legendary subway ride (as the story goes, he had never taken one before the eve of Dunkirk) and his subsequent powerhouse speech leading the country into battle are so real as to bring history books to life.

The film’s soundtrack is inseparable from the depiction of the grandeur and horror of the place and time. Three-time Oscar nominee Dario Marianelli reunites with director Wright and uses the dark themes of “Atonement” and the traditional sounds of “Anna Karenina” to wonderful effect. Four-time Oscar nominee Bruno Delbonnel handles the complex cinematography, a combination of dark, claustrophobic indoor tones with cloudy sepia outdoor shots underscoring the looming atmosphere of despair.

Lily James does a great job as Elizabeth Layton, Churchill’s mousy secretary who takes on a courage of her own. She is Churchill’s foil and eventual inspiration. As she realizes the reality of the war, so does the viewer. As Churchill sees her soul, he sees the soul of the nation. Kristin Scott Thomas fills out the background as Clementine Churchill.

A spectacular production with a first-rate cast and crew, “Darkest Hour” is nonetheless the work of Gary Oldman. He is the core of the movie and does not disappoint. 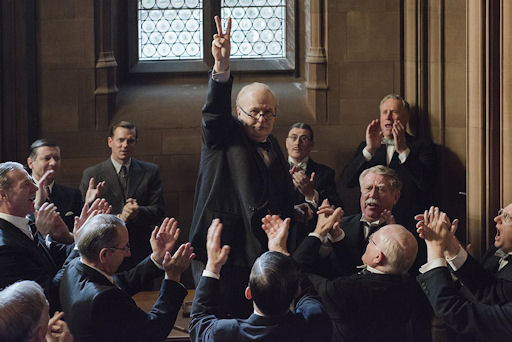