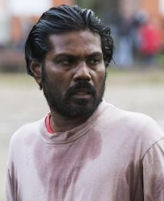 “Dheepan,” Jacques Audiard’s winner of the Palme d’Or at the Cannes Film Festival, is a masterful tale of survival as well as a harrowing cautionary note about the perseverance of the violence of war. The story centers on Dheepan (Antonythasan Jesuthasan), a Tamal Tiger child soldier grown into leader during the final days before the movement is crushed by the Sri Lankan government. In the brutal defeat of the suicidal Tigers, no bloodshed is spared as their entire families are massacred in revenge for their rebellion and their own ruthless acts.

Showing a rare sense of self preservation, Dheepan escapes and makes it to a smuggler’s departure point. Here, the film takes the first of several stunning twists as the camera shifts to young Yalini (Kalieaswari Srinivasan) running through the refugee camp looking for a child.

At first, the search seems to be for her own child, but instead it is a search for any child. In the final moments as the crowd is boarding the escape vessel, Yalini grabs ten-year-old Illayaal (Claudine Vinasithamby) and runs for the landing. There she accosts Dheepan and declares they are a family; the family they will need to satisfy the authorities in France to obtain asylum.

This film is much more than an adapted novel. The lead Anthonythasan Jesuthasan trained and fought as a boy soldier with the Tamal Tigers until he was nineteen and was able to flee to France. He wrote his first novel, “Gorilla,” in 2001 about his experiences fighting for the Tigers in what is certainly one of the most brutal conflicts in history. In France the struggle goes on and the few soldiers who miraculously escaped beheading by the authorities are expected to remain loyal to the cause.

In France, the family is confronted with grinding poverty and persecution at the hands of local street gangs. Dheepan submerges his own war trauma and he, Yalini and Illayall seem to be making a go of it, barely.

When shots break out one day over a drug war among the locals, Dheepan can no longer keep his trauma in check. He will be challenged to the core to define who he is as a westerner and how far he will go defending his right to exist in a radically foreign environment.

The cinematography is the resettlement community is breathtaking. Director Jacques Audiard and DP Eponine Momenceau are able to capture the horrendous sights and sounds of the ramshackle, barely controlled mass of humanity in the shelter. It is a community drawn together by the knowledge and fear of something far worse, but society has turned its back on the refugees.

Thrown together as a makeshift family, the couple copes with their own emotions as they see their child growing up far too fast as they struggle to reconcile long imbedded loyalties with a chancy live in their new country. Sometimes it seems the lucky were the ones who did not survive the war. 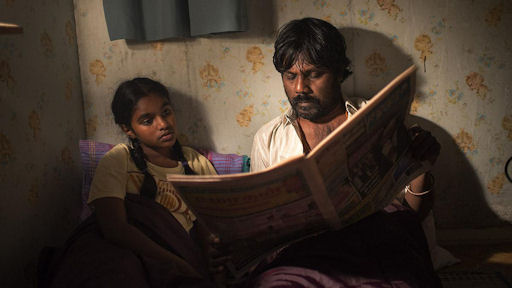