Review: The Man Who Knew Infinity

Jeremy Irons is great, as usual, but the rest of the cast seems to be just going through the motions in “The Man Who Knew Infinity,” the story of a nerd underdog who makes good. 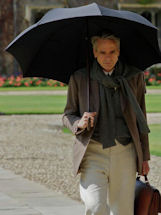 Irons does a fantastic job playing Cambridge mathematics Fellow G.H. Hardy but it is not enough to save this morass of melodrama. Srinivasa Ramanujan Iyengar (Dev Patel) grows up in Poverty in India but sprouts a mathematical genius that borders on insanity. One would think he would be right at home at Cambridge in the WWI era. No dice. His genius, while instantly recognized by Hardy, is shunned by almost everybody else.

After being rejected, he dies. His theories are now being used to better understand black holes. Unfortunately, that tidbit of trendy scientific term dropping is too little too late.

It is hard to say whether it is the directing or the writing of writer/director Matt Brown that makes this film such a snoozer. The story is interesting enough. The WWI history combined with the creepy nerdiness of Cambridge make a fascinating setting. But the set-up is just too glossy and the people are just too beautiful. We do not know if we are in for “A Beautiful Mind” meets Harry Potter or “Slumdog Millionaire” meets Stephen Hawking.

Speaking of “Slumdog,” Dev Patel, skilled as he is, tries to bring that bright cheery persona to the part of the math genius. Unfortunately, the two roles are completely different and he does not get it, nor does Matt Brown. When asked how he can come up with advanced mathematical relationships off the top of his head, he explains them as gifts from God and reacts with inexplicable vile when asked to prove the equations. Maybe this was actually the way the real mathematician behaved, but this film does not have the chops to make us believe it.

The screenplay would have been better off if it cut the tedious melodramatic scenes of Ramanujan’s disastrous home life and explained more about his mathematical achievements and his point of view. Instead it seems to have been dumbed down to a series of emotional temper tantrums and inexplicably obtuse mind-sets on the part of the greatest scientific minds of the period.

The bald faced racism of the English upper crust is thrown in here and there, as to force the viewer to better appreciate the challenges of being a genius, of seeing what no one else sees. After being beaten and contracting tuberculosis, the whiz kid works himself to death even though the university itself is a medical facility for the military

Perhaps all this is true, but the movie does not get the point across.

Toby Jones almost steals the show with his portrayal of the playful, rational and pretty darn smart Littlewood, but that is too little too late. The rivalry between Littlewood and Hardy could have been the most entertaining part of the movie. 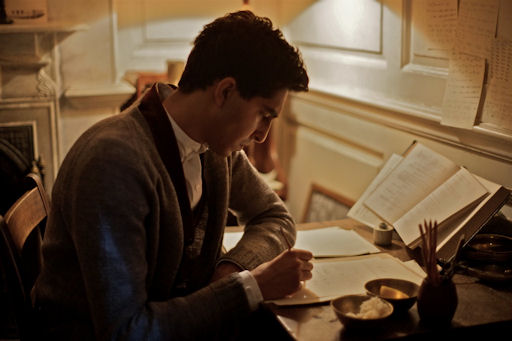