Jack O’Connell blasts out of screen as Kyle Budwell, a New York truck driver who has lost his life savings in a securities gamble. He sneaks into the TV studio where finance TV show host, talking head and investment clown Lee Gates (George Clooney) is starting his weekly song, dance and spiel. The film begins 10 minutes before the start of the TV program with peppy and funny dialogue between Gates and his director, Patty (Julia Roberts), and the action never slows down. 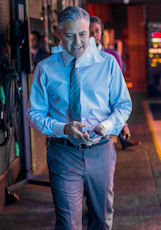 Almost the entire movie is a TV show that spins wildly out of control. This is a classic film within a film that took more than a little skill to keep on the tracks. The action starts in the TV studio where the seemingly deranged Kyle sneaks in and commandeers the sound stage to announce his manifesto. Absurd in the extreme, the viewer so badly wants Kyle to win that they overlook the foolish screenplay.

Director Jodie Foster does a good job for having only a few directorial credits. She may not have had to direct Clooney and Julia Roberts very much, but she must have had a hand is the fantastic editing of this non-stop action yarn. If the theory behind the screenplay is weak, the movie is entertaining from start to finish. Just as she perfectly manages the depiction of the split second timing that is routine in a TV studio, that timing is echoed in the movie itself as the set moves from the studio into the streets of New York.

The morally adrift Gates and his hogwash laced financial savvy are interspersed with the snaps and crackles of a network seemingly unable to cope with the lies being transmitted on its broadband. Gates himself shows signs of short circuiting and joining his foil Kyle in a one-way trip to lunacy.

The movie has a foundation of solid supporting roles, including Dominic West of “The Wire” as amoral securities fund manager Walt Camby. He does not get a lot of screen time, but his time is well managed, another nod for Foster.

Caitriona Balfe (“Outlander”) plays a corporate functionary who grows a conscience. Although her acting is only fair, her extreme attractiveness reflects the illusion of the deal that cannot fail. She is the siren of greed, manipulated by the CEO who is, in turn, manipulated by the corporation he supposedly runs.

The success of this movie is in the rapid fire action and editing. Oscar-nominated editor Matt Chesse (“Finding Neverland” 2004) is able to edit the first part of the movie like the fast paced TV production it is and the last part like a cinema verite’ documentary.

Oscar nominated cinematographer Matthew Libatique (“Black Swan” 2010) brings the dark and dirty underside of the unholy trinity of TV, business and unbridled greed splashing out of the screen. He shoots the first part of the movie like a TV show and the last part like a modern “Dog Day Afternoon.” 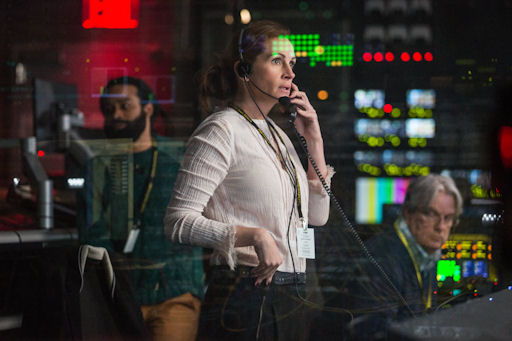