This is Shakespeare on steroids, a poetic banquet of color, action, rhythm and sound that transcends expectations. Featuring The Bowery Poetry Club, new director Max Powers reveals the revolutionary bedrock of Slam Poetry through an energized pace, smashing colors and syncopated sound in film verité.

No
more editing blackness out of our own art
No
more spoon feeding the oppressor
No
more poems, going gently, into the bleach
(“Google Black” from “Don’t Be Nice”)


Powers has done for Slam Poetry what Spike Jonze did for music by embedding the poetry with images and sound that enhance the excitement and meaning.

The storyline is the path The Bowery Poetry Club takes to reach the National Slam Competition in Atlanta, Georgia. The initial competition, at its NYC headquarters on Bowery Street, includes 100 contestants who are judged by selected audience members on a scale of zero to 10. The middle five scores are added up and the five poets with the highest composites become the members of the year’s Slam Team who will go on to compete at Nationals.

Powers has explained that the team’s coach, Lauren Whitehead, works with the credo “Don’t Be Nice” because “to ‘be nice’ is to stay on the surface of things, is to perpetuate the status quo…” Whitehead coaxes her team members to expose raw their “inner demons and buck societal expectations to write truthful poems…” Like Shakespeare, the goal is to expose the human comedy, the human tragedy and the roles we play.

Powers writes that viewers “will be shocked by the radical honesty of the film’s characters as they openly discuss race, class, and gender.”

A countdown of the weeks left before Nationals weaves the story together. Coaches Whitehead and Jon Sands orchestrate schedules, arrange regional competition, offer support, and most importantly critique their team members to elicit deeper and still more intensely personal writing.


When I first started wearing glasses, my doctor warned me that I would
go blind if I didn’t. I used to think it was worth it if I didn’t have to see people hit me again.
(Sean “MEGA” DesVignes, “Eight Things that are True About My Eyes”)


The pressure for inner revelation is intense. At one point, Ashley August is taken to the subway. While on a train, on a platform and walking amongst NYC pedestrians she shouts out her poetry with passionate abandon against a cacophony of sounds, people, and bright colors that epitomize her theatrical delivery of “Why do you always get like this? You are the most dramatic person I know!”

Invited to film festivals around the country, “Don’t Be Nice” has already won awards, including Best Film Documentary at Vail and at the New Filmmakers Festival in Middlebury, VT as well as the Audience Favorite at the RoxFilm in Boston.

The surprising, thought-provoking, intense “Don’t Be Nice” opens Sept. 20 in LA and Sept. 27 in LA. 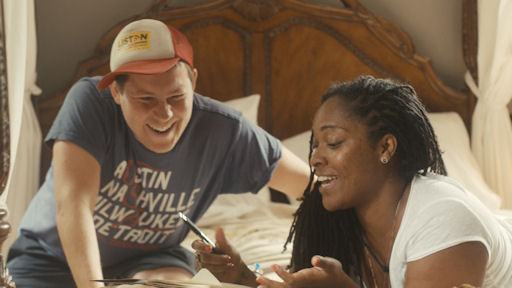