Review: Don’t Read This on a Plane 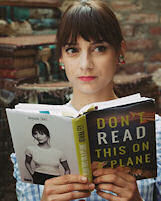 A young, aspiring writer gets her first big break when her novel is published. Walking out the door for her exciting round of readings to promote the book, she gets the perfect phone call from her perfect publisher. He and the company are perfectly bankrupt and she is without a tour. Actually, she has the tour, but little else. Undeterred, she packs a collection of ingénue designer clothes into her roller luggage and hits the road, hitchhiking to meet an assortment of, unfortunately, forgettable characters.

Jovanna – Audrey Hepburn meets Sally Hawkins without the acting talent – has written quite the worldly book without ever knowing that people hitchhike in casual clothes. It is hard to say if this is part and parcel of the overall out-of-kilter feeling of the movie, or if the film maker intended a phoniness that would resolve into truth. When it does resolve, into something, the feeling is so saturated with millennial angst that we no longer care.

Writer/director Stuart McBratney has put his heart on the screen in the person of Jovanna (Sophie Desmarais). The surrogate heroine learns it is alright to be a little phony in the selling of a book as long as one is not phony with oneself. The plot is caught between the importance of self knowledge and the inherent beauty of naivete. Stuck on the barbs of this fence, the impossibly huge wardrobe of ostentatious costumes (how do they fit in that roller luggage?) flops around like inadequate tools in an oversized toolkit. Desmarais seems at times perplexed by her place in the story and at others perplexed by the story itself.

Nostalgia abounds, at least for viewers who claim the coming-of-age experience of hitchhiking through Europe. There is little of ignorance or self entitlement enacted by the heroine that we ourselves did not perpetrate in our floundering attempts to see the world and know ourselves. The beauty and scariness of different people and places so different shaped our lives, a little. Having said that, enough is enough.

A talented cast of character actors is presented at face value, the audience apparently expected to immediately grasp how charming and quirky they are. Jovanna has been sheltered and so being forced to literally live with these weirdos is quite an experience, at least for her. The majority of the rest of us, having seen and lived with them before, have learned life is better without them. Forced to know her audience by being constantly penniless, one wonders why she did not simply sell one of her outfits, buy a good pair of jeans and perhaps parley the deal into a Motel 6 room.

In fairness, none of that is the point. In selling herself, Jovanna gets to know herself. Her book may or may not become a success, but she knows what it is because she knows what she is. While this may be comforting to her it does little to justify the time the viewer sat in front of the screen waiting for something of significance to happen.