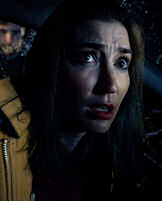 Yes, it is a good routine and the cast and crew do their best to make a film out of the script. Even so, the viewer is left wondering why they used the film. The mystery passenger and his bloody knife get things off to a good start and the switch from bad guy to good guy is funny. Then comes the rest of the movie and things seem to coast.

Casey Dillard wrote the screenplay and plays Emerson the Uber driver. Ms. Dillard trained in Second City and was part of a selected apprentice team for the Chicago Improv Festival 2010. Hence the screenplay as a comedy routine. Make no mistake, she is great, and the standup routine all the better for being delivered sitting down in a car. Like Ginger Rogers doing it backwards and in high heels with Fred Astaire.

There is plenty to make fun of in the gig economy, and Uber driving may is on the top of the list. Richard Speight Jr. as passenger-on-a-mission Roger fits in with the assortment of crazies Emerson has endured as counselor, human crying pillow and keeper of the sub-normal. Even better, he does not just wave his bloody knife around, he has apparently used it on people. Not just any people, mind you, he uses it on demon possessed people. His family has been cursed and it is his destiny, or duty, to dispatch as many as possible.

The set-up is flaky, as it is supposed to be, and would have made a great film if it had actually gone somewhere. By the end of the movie, not much has changed – except Emerson has had quite a night.

Intentional or not, funny moments occur. The usually claustrophobic car interior POV is turned on its ear by the off-the-wall circumstances. The passing views out the various windows reference the hilariously phony studio shots of the golden era movies, as if the script is telling us “OK, it is fake. So what?”

Potty humor creeps in, along with apartment room mate humor. Good to get that out of the way, but what about the plot? Politics is important and the poverty stricken apartment dwellers with the poor indoor plumbing have equal rights on screen time along with the Uber racket. Lesbian relationships get at least a passing mention, fitted in between gnashing teeth zombies. Even killing and exorcising demons is a gig job. Roger hardly gets paid and he has a lot of explaining to do, all the time.

The soundtrack fits in with the foggy window effects, being something sampled from the “Bonanza” cowboy series, or maybe “Lone Ranger” travelling music. Do not go to this one too stoned since you have to pay attention. Even so, it is worth the price of admission and a tantalizing trip to the twilight zone with a cast and crew of great potential. 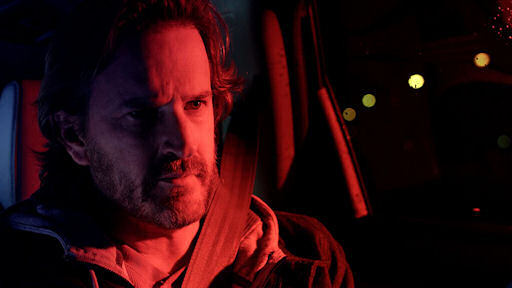