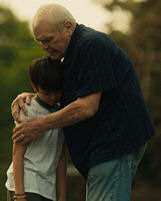 In one of the last performances before his death on April 15, 2020, Brian Dennehy brought a simple little film to glory. Cast as a retired old fogey named Del, who has lived in the neighborhood since he married about 50 years ago, Dennehy makes this film glow.

Driveways are evident on this neighborhood street, but the title better matches the idea that everyone is in transition. They are either going or coming in many ways. Whether it is by death or by moving, there is the going. And whether through reunifying, coming to terms with a situation or through relocation, there is a coming.

Del is a widower and Korean War Vet who was the next-door neighbor of a woman who unexpectedly dies. Her sister, Kathy (Hong Chau) comes with Cody, her 8-year-old son, to fix the sister’s house up for sale.

Cody, an 11-year old played by sweet Lucas Jaye, comes with his mother, Kathy, to clean out his aunt’s house after her unexpected passing. Seemingly the more responsible one, Cody grinds out his mother’s cigarette butt with his tennis shoe after she carelessly lets it drop outside on the pavement. He also gives a cat, found dead inside the house and tossed into a plastic bag, a proper burial.

Cody is a softy. He vomits when there is aggression and he shies away from playing with the boys who like to fight and cause trouble. He’d much rather hang out with Del.

Andrew Ahn, a young but already noted director and writer, is generally known for work that offers hope and fights prejudice. He is a gay Korean-American director who grew up in Los Angeles. He promotes diversity in the arts through mentoring projects like the Pacific Arts Movement’s Reel Voices and Outfest’s OutSet.

In “Driveways,” Ahn asked his producers if the mother and son could be Asian. He got his wish. This one aspect of the film subtly played out on a theme already created by Cody and Del. They see themselves as outsiders, not quite fitting in, like Asians in an all-white neighborhood. This is Ahn’s territory, being a little different and somehow rising to the occasion.

But also quite obvious is the deft brilliance Ahn uses to coax out a natural performance by Jaye. Set beside masters Dennehy and Chau, the acting is realistic and poignant.