Born in 1931 in Iran, Bahman Mohassess studied in and later permanently relocated to Rome. He says, “In this slim, vast uterus known as Rome I began to work and to live. A city whose population squirms in an eternal coitus, whose alleys are stained with the sperm of bygone centuries. “

A hyperbolic speaker, Mohassess was an Iranian painter, sculptor and iconoclast who, like Camus and Sartre, blasted conventions and ideas of religion and found man’s history, his neglect and destruction of the very things that made him human, absurd.

The uncomfortable film title detracts from Mitra Farahani’s sensitive, careful study of this great artist. It begins and ends with a maid carefully cleaning each item in Mohassess’s apartment – just the way Farahani is carefully, patiently documenting the life and work of her subject until his death in 2010.

Like the existentialists, Mohassess was struck by life’s absurdity. He recognized that his artistic reactions to the death of Martin Luther King, Jr., the My Lai Massacre, the Gulf War, and the incursion into Iraq made no difference in the world. He saw the world simply repeating over and over again the same atrocities, the same mistakes, the same inhumanity to itself. His artwork, including the film’s namesake, Fifi, are missing that which differentiates us from most animals – our dexterous hands, flat digital feet and binocular vision. His figures are as he saw people – missing the gifts that distinguish us from the beasts of the jungle.

Mohassess creates us as he sees us. Bodies obsessed with basic instinctual needs tussling in conflict. The red Fifi, the painting Mohassess kept closest to him, was shrouded in his favorite bloody vermilion without hands or facial features.

The title of this film should have simply been Mohassess. There is a sense in this name of Mohammad, Jesus and a big cry of disappointment. Given so much, society destroys itself over and over again. So too with the chain-smoking Mohassess. Some of his greatest works, his reactions to specific events in history, he has destroyed. Other pieces the Iranian government, under the Shah, similarly destroyed for him.

The film details why. It also carefully shows pieces of work that have been lost forever and records pithy comments from an artist whose life was defined by his grim amusement at the unchanging absurd cycle of pain and suffering humans inflict upon themselves.
He laughs with the cancerous rasp of a life-long chain-smoker after he speaks each bleak observation, acknowledging that “Fifi” is his self-portrait.

“Fifi Howls From Happiness” opened at the Lincoln Plaza in New York on Aug. 8, and will open at the Laemmle Royal in Los Angeles on Aug. 15. A national release will follow. 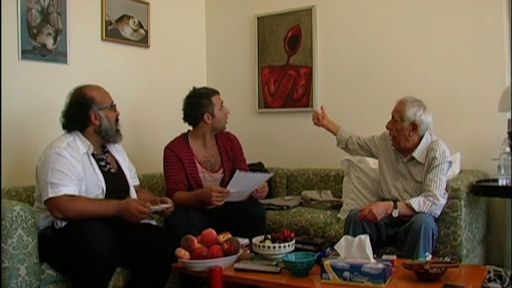