Review: One Mile Above (aka Kora)

Who in the world would want to bike 1,200 miles up into the world’s highest elevations where icy roads give no mercy to little bikes with no snow tires? The scariest moments are the free-fall downhill coasts when there is so little control. A rock, an ice slick, another vehicle – all could mean a sudden, painful wild skid down a chasm. 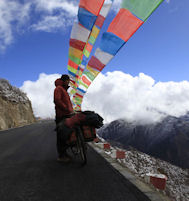 The story of this film’s creation, often with just a bucket of water to serve all purposes, is almost as heroic as Shuhao’s ride. Fraught with heat, loneliness, inexperience, unfamiliarity with the terrain, bitter cold, wild animals, fatigue and accidents, this isn’t your ordinary bike adventure.

What motivated this 24-year-old newly graduated university student to leave his girlfriend when he didn’t know the first thing about biking or bike maintenance? Based on the true story, Zhuan Shan” written by Xie Wanglin, a crisis had hit his life, leaving him broken and at a loss. His brother had died unexpectedly while on his dream biking expedition to Tibet. Picking up his travel diary from the open casket, Shuhao decides to keep it and fulfill his brother’s dream.

Glorious vistas of China and Tibet fill the screen as Shuhao, with a lack of confidence, begins the trip. Luckily for him he finds an experienced biking partner along the way who is full of a love for life, knowledge of biking and familiarity with the route. Handsome, Shuhao also catches the eye of a pretty widow high up in the mountains where we wish he’d decide to stay.

But like classic heroes, he cannot be deterred from his destination. Fighting through a broken bike, freezing weather and the unlucky loss of his biking partner, Shuhao’s journey is just as much spiritual as physical. Celebrating freedom of mind, perseverance, strength of will and physical stamina, “One Mile Above” is a gloriously beautiful biker’s trip through China and Tibet. 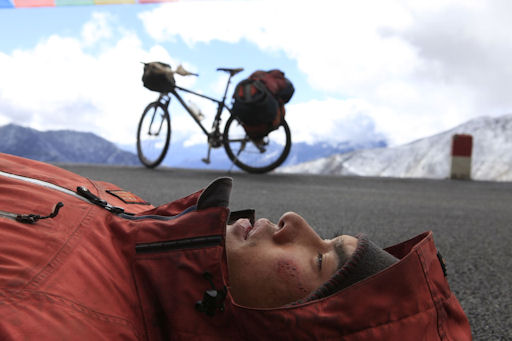