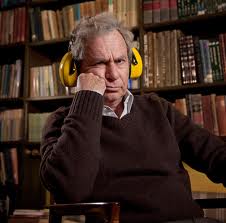 There are five nominations for this year’s Best Foreign Language Oscar and three of them were shown at Portland’s 35th International Film Festival this month. Normally you’d be thinking that this would be a great opportunity to see great work, but unless something is wrong with me, I have to tell you that something is amiss with the Oscar selection process.

Take for instance the Israeli film, “Footnote,” which made the cut-off for the final five. It is the story about two Talmudic scholars, Eliezer and Uriel Shkolnik. They are philologists, which means that they study historic texts in an effort to establish their original authenticity and meaning.

One day Eliezer (Shlomo Bar-Aba) gets the phone call that will end up testing not only his true philologic skills, but will also have the potential to drive an irreversible wedge between him and his son. He is congratulated for winning the Israel Prize, which in reality is regarded as Israel’s most coveted honor. This sounds great, but the problem is that a committee representative called the father in error, thinking she had called the son, Uriel (Lior Ashkenazi).

It could have been a great study on father/son relationships. Instead it is irritating, unrealistic and dismal. Why is it in the top five Oscar contenders for best foreign language film?

Thinking I must be missing something, I’ve asked author and historian — a philologist, if you will — Ed Kamholz, to set me straight (his answers are in bold).

So Bev, what if the context of this film wasn’t about some deadly obscure point of academia that few know and even fewer care about, but instead was about an issue having life or death consequences…like if you win this contest you get to live and your competition doesn’t? Change Footnote’s central theme from an academic endeavor that would put most mortals to sleep to one that creates real tension and the film could instantly command greater attention.

The problem is that the stakes in “Footnote” never rise to that level of interest and so we’re left to wonder, what’s so important? The answer, of course, is N-o-t-h-i-n-g. You didn’t miss a thing, but those who think this film is Oscar material did.

Besides the fact that you should be the script editor, did you find anything redeeming about this Oscar entry?

Yes, in fact I did. Uriel, the son who should have won the accolade instead of his father, demonstrated great integrity and courage by confronting the selection committee, and in particular his father’s nemesis. In a cruel twist of irony by a panel dedicated to awarding this honor to a philologist, a truth seeker, a solution is suggested that would not only be unfair but of great cost to the son’s personal and professional stature.

I agree with you about Ashkenazi’s sensitive caricature of Uriel’s integrity in dealing with this awkward situation. But it’s the role of the father, actually brilliantly played by Bar-Aba, that goes against my intuitive observations.

Fathers revel in the success of their sons and live through them, basking in the reflective glow of glory they figure can be attributed back to them. So this flip, the father being such a stinker about his son’s honors, makes the entire premise of writer/director Joseph Cedar’s screenplay too difficult for me to accept.

So, what if we looked at it as a generational commentary, instead of familial? For example, could the self-centered father who even insults his son’s scholarship to the press represent an aspect of an entrenched, insular aspect of society that refuses to accept any contributions except its own?

Maybe I’m thinking of politicians who stick with illogical policies and won’t compromise – to the detriment of a nation. Hubris vs. Humility.

Basically Ed, is there a universal parable in this admittedly well-acted film that catapults it to Oscar consideration, or am I really on a divergent track that doesn’t fit?

Your notion of a universal parable isn’t off-the-track so much as it doesn’t correlate to the central subject around which this movie is staged, which simply isn’t important enough nor are the consequences great enough to support much of anything except on a theoretical level.

One last question, Ed. You know, “Footnote” not only got the nod for an Oscar finalist, it also won nine prizes at the 2011 Ophir Awards and won the Best Screenplay Award at the 2011 Cannes Film Festival.

I’ve got a few different answers for you. Take your choice.

The nominators didn’t have to pay for their tickets.

Someone must have switched the subtitles.

Blackmail is a strong possibility.

Thanks a lot, Ed.

There are other problems with the script, including the near silent role of Eliezer’s wife. But, the bottom line is that we agree that though the acting is commendable, the script has unresolved problems in premise and detail.

“Footnote” opens March 9 in NYC and March 16, 2012 in Los Angeles
and was featured at the 35th annual Portland International Film Festival.