Review: For the Love of Spock

The raised eyebrow, the split fingers salutation, the mind meld and the dignified pointed ears: Spock represented a logically-evolved mind dedicated to the search for truth. 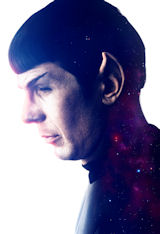 Leonard Nimoy, who embodied this Star Trek (ST) character, became inextricably linked to his self-controlled TV persona and his own name became interchangeable. When Barak Obama heard that Nimoy had passed away he wistfully responded, “I loved Spock.”

“For the Love of Spock,” a loving tribute to a father and a TV character, explores the life of Nimoy and how he came to be such a respected TV and film star. This film, supported by Nimoy before his death of pulmonary disease, is a collaboration with his son, Adam Nimoy. While it is certainly the story of Nimoy’s life, it also reflects the coincident nature of Star Trek’s logically disciplined half-Vulcan, Mr. Spock.

The alien half-human, Mr. Spock, represented the alternative to the spontaneous, swash-buckling Captain Kirk (William Shatner). Spock’s self-controlled, logical distance was juxtaposed to Kirk’s helpless romanticism. As George Takei says, “Those characters were the yin and yang before the camera and it worked perfectly.”

Adam Nimoy nostalgically reminisces that Kirk and Spock represented the physical and spiritual domains, the essential duality of humankind. However, I will add that in the instances when these two facets converged, when Spock allowed his human emotional side to surface, the audience experienced a kind of epiphany about the need for balance between both domains within us all.

Adam allows several revelations in this documentary. There are two, perhaps already well-known amongst the Star Trek fans, that fascinated me. The first is that Nimoy is the one who came up with the split Vulcan greeting. As a practicing, devout Jew, he witnessed a special ceremony where religious leaders blessed the congregation with the first letter in the name of God. He suggested this on set as a Vulcan greeting to go along with the words, “Live long and prosper.”

The second revelation is that it was almost impossible for Nimoy to separate himself from his character. He would become Spock for week-long shootings, arriving home by 8 to memorize his lines. He could not relax his characterization until Sunday afternoon – but then Monday would come again. This made it difficult for his family to really get to know him and led to some estrangement. Often he would even do promo on weekends, so there was both a psychological and physical distance.

Chock full of interviews and ST footage, “For the Love of Spock” is a loving tribute to an actor and a father. It opened this September at these theatres and is being featured 9/9-15 at the SIFF Cinema Upton in Seattle.