Even though girls are not allowed to perform in Afghanistan or Iran, Sonita is absolutely obsessed with singing. This brave documentary follows her as she dangerously competes in, and then wins, an international online rap contest. 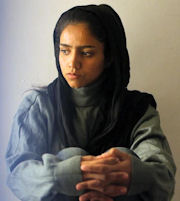 Award-winning filmmaker Rokhsareh Ghaemmaghami knew she had an unusual subject for her documentary. Sonita, an Afghani girl who initially immigrated to Iran with her family to escape persecution from the Taliban in Afghanistan, has break-through energy and drive.

An eye-opener, because Iran has been demonized in the west, is that Tehran runs an amazingly compassionate program called The Society for Protection of Working and Street Children (SPWSC). Sonita was eventually given support there. Through a worker at the agency, the filmmaker heard of Sonita and the three-year documentary process began.

While Sonita is making headway in reaching her dreams in Iran, back in Afghanistan, where her family returned earlier, she is called to return immediately home. In order for Sonita’s brother to buy his newly negotiated bride in Afghanistan, he needs to sell her to an available man for a reciprocal price. Her mother insists she help her brother.

In Sonita’s community, brides are sold for $3,000 if they do not have a dowry. They sell for up to $12,000 if they do. In Sonita’s case, her selling price is exactly what her brother needs — $9,000. This is the second time she has been propositioned as marriage material.

The first time, she was 10 years old. Having slipped from that early imprisonment due to uprisings in her homeland, this time there seems no way out. She sits sunk in a corner knowing that a marriage would signal the end of her freedom and most certainly her underground performances.

The compassion of both the Tehran SPWSC and the filmmaker, Ghaemmaghami, is inspiring. The tension between generations, genders and customs are not going to slip away, but what happens to Sonita is a Cinderella story that culminates in a surprise ending that will turn the viewer misty-eyed.

“Sonita” premiered at the 2016 Sundance Film Festival and won the Audience Award for Best Documentary at the IDFA Amsterdam Film Festival. Below is Sonita’s ground-breaking rap song that reflects the repressive doors she fights against: