Professor Phillip Goodman is comfortable with himself. As an A-list psychic debunker, he is quite at home shattering others’ spiritual illusions. His mad dog attacks on celebrated practitioners of the sixth sense almost always win him another stuffed head over the mantle, and even a failure gets him in the papers. His one goal in life is to equal the scalpel-like precision and Sherlock Holmes-level insight of his hero Charles Cameron. When the champion debunker of all time invites Goodman to an urgent private conference, the young master believes he has arrived. He has arrived, but to a destination beyond his dreams, or his control.

Andy Nyman plays smug Professor Goodman to a tee in a story that starts out simple and bends midway into a hurricane of plot twists. Debunking legend Cameron has been driven into a nervous breakdown by three hauntings that he cannot explain, or escape. Incapacitated with the fear that these ghastly possessions are the real, undefeatable thing, he begs Goodman to take over and prove him wrong.

As Goodman interviews the subjects of the hauntings, the movie starts off as a comfortable “X-Files” knock-off. Then, disturbing memories of his own painful past increasingly displace his calm logic. The stories told by his interviewees are interrupted by flashbacks of his insane father, his childhood failures and his dread of adulthood, until we can hardly tell one from the other. In fact, Goodman himself can hardly tell on from the other.

As in all the best horror movies, this one is mostly without blood or explicit violence. A well-executed soundtrack, with only a few obnoxious sound blasts, supplies a well-done stream of distorted and barely audible grindings and groanings. The first two stories, a night watchman in an elderly women’s refuge and a teenager on a midnight joyride gone wrong, are nicely contrasted to the bright daylight and expectant father of the third story. The Hitchcockian stairway becomes the drainage tunnel harboring the dreadful secret of Goodman’s past. Children playing on the pristine, windswept beach move fluidly between reality and stubbornly resurfacing nightmares.

Jointly written and directed by Jeremy Dyson and Andy Nyman, Nyman also has the lead role as professor Goodman. Dyson, as a major writer for the redoubtable “The League of Gentlemen” TV series, knows weirdness when he sees it (or thinks it). Teaming up with Nyman, the co-writer/producer for the outlandish “Derren Brown” series, was a guaranteed success. BAFTA winner for his supporting work in 2010’s TV blockbuster “Sherlock,” and fresh off his Golden Globe nominated role as narrator Lester Nygaard in the “Fargo” TV series, Martin Freeman brings it all back home as most unhappy new father Mike Priddle. Four-time BAFTA winner Paul Whitehouse and young Alan Touring Alex Lawther round out a strong supporting cast. Here is hoping for more from this team. 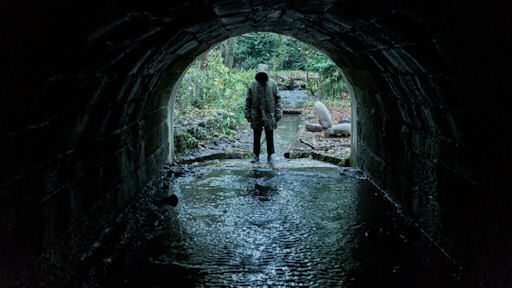