Renee Bennett is a women with low self esteem, a job that isn’t fulfilling and is for the most part, your “average” woman. Who is Renee Bennett and why is she attempting to mirror the qualities and experiences so many women have? What does it look like in that proverbial mirror? It looks like Amy Schumer, that’s who. “I Feel Pretty” is definitely a film that asks for reflection and beckons for an ear to transfer a message to. 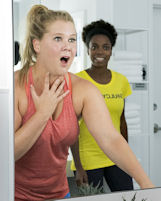 The plot of “I Feel Pretty” isn’t super complex in and of itself. A woman with low self esteem perceives the world from the perspective that only thin, attractive women get any attention not only in the work place but also the world. She wishes she fit the world’s definition of “pretty.”

During a freak accident at a spin class, Renee hits her head, knocking herself out. When she comes to, she sees herself in the mirror and what she sees is that she has become her interpretation of what the world considers beautiful. Renee has some lessons to learn as we follow her journey as the woman who suddenly has all the confidence in the world.

Schumer is definitely someone I consider to be funny, but this was a frustrating film for me. Schumer is funny in a PG-13 world, but she’s absolutely hysterical to me in an R-rated setting. I do understand that perhaps “I Feel Pretty” has a message that is important, especially to younger aged females and that certainly justifies the PG-13 rating. What this means for someone like me, however, is that I was disappointed on a comedic level and that is extremely frustrating as I stand behind the film’s message very strongly.

The plot is diluted and predictable. The stand-out and unpredictable part of this film, for me, was the performance by Michelle Williams, who plays a woman in power who isn’t taken seriously enough because her voice rings in at a high, wispy octave (a statement about the treatment of women on its own merit), I was not expecting the performance I saw from Williams and was thoroughly impressed.

Overall, I am torn on a recommendation for “I Feel Pretty.” It has some really funny moments and a relevant message, not just for women, but men as well. On the flip side, I was disappointed and believe the film stayed in a cookie-cutter formation, where I see the potential and boundaries that could have been pushed.

This is not by any means a horrible film, and viewed by the right demographic “I Feel Pretty” does serve a purpose. If you get a chance, go see it, if for no other reason than to watch and listen to Williams steal all the scenes she is in. 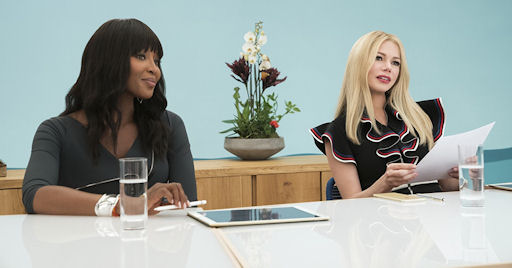