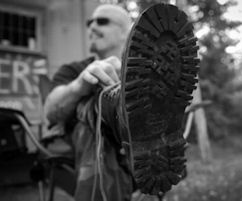 In the last 30 years, “The vast majority of the deadly terrorist attacks occurring in the US have been perpetrated by domestic extremists” and “since 2013, the number of fatalities due to violent extremism in the US has quadrupled.”

Joe Biden is aptly basing his presidential campaign on the battle for the soul of America. “Healing From Hate” reports that there is hope, but from an ironic source – the extremists themselves.

What is it?
“Healing From Hate” documents the help-organization called Life After Hate, founded in 2011, exclusively for violent extremists who want to come in from the cold. Its founder and leader, Sammy Rangel, a former gang leader and victim of especially pernicious abuse from his mother and uncle, reciprocated in kind to his victims. But eventually, he had had enough.

“Healing from Hate” shows that “the amount we dehumanize others is the extent to which we are dehumanized inside.” Rangel’s vision is to turn that around.

What is the attraction?
Research indicates that in all likelihood a man who is a bully, a violent offender, or a compulsive abuser has experienced some degree of emasculation, humiliation, and/or abuse in his own life. To wreak havoc on another is exhilarating and sends adrenaline pulsing through veins, making the perpetrator feel, at last, temporarily powerful.

The men interviewed for this film have left violent gangs, white supremacist organizations, and neo-Nazi groups. Their early childhoods were fraught with disregard, unspeakable abuse, and often a dad who let them know he didn’t care about them.

Why might some want to leave?
Sometimes it’s through becoming a father, sometimes it’s because the repetitive violence was simply taking a toll, and sometimes it’s due to incarceration or injury, but at some point, the men in Rangel’s group have had enough.

Influenced by Trump?
And yes, those interviewed for the film point out that Trump’s rhetoric has helped the cause of white supremacy and motivated violence. From their perspective, the Make America Great Again motto harkens to a time when the white male was supreme and got respect, when people of color were restricted, and when people throughout the world regarded the US as White America.

Life After Hate
Under President Barack Obama, the Department of Homeland Security awarded Rangel’s Life After Hate organization, a two-year $750,000 grant dedicated to helping individuals leave their violent groups and reintegrate into society. When the Trump administration came on board, the grant was canceled. However, two weeks ago, on Sept. 16, 2020, it was reinstated.

“Healing from Hate” was written by Peter D. Hutchinson, producer, filmmaker and writer, and David Kuhn, prior NYC public defender and prior journalist embedded with troops in northern Afghanistan. Together they have created a film that helps us understand the foundational attraction of extremism and its violence.

“Healing from Hate” had its virtual cinema and theatrical release on Sept. 4. For information on viewing availability, go to the film’s website and click on “Engage.”