Emerging director Theodore Melfi’s “Hidden Figures” tells a wonderful story about three unknown women who supplied powerful parts of the NASA space race puzzle. In a screenplay co-written with Allison Schroeder and based on the New York Times bestseller by Margot Lee Shetterly, black women buck tough odds in a milieu dominated by white males. As it turns out, they have a lot in common with the men around them, who end up placing the intelligence and work ethic of the women above race.

The movie stars Taraji P. Henson, Octavia Spencer and Janelle Monáe, math geniuses plucked from their hometowns and beckoned to America’s fledgling space program. Henson plays Katherine G. Johnson, the character who, rightly or wrongly, gets most of the screen time. As the movie tells the story, she is the math machine of the trio.

Lighting fast in applying analytic geometrical calculations to problems of velocity, acceleration, altitude and trajectory, Katherine immediately troubleshoots flaws in her male peers’ work. One can only imagine the ensuing consternation. When her conclusions proved correct, and when she stepped up to the plate to show better ways of solving the problems, mission direct Al Harrison (a great performance by Kevin Costner) was hooked.

Monáe plays Mary Jackson, one of the first women to ever be promoted to NASA aerospace engineer, and certainly the first black woman. She was placed in the group using newly emerging wind tunnel tests to simulate the unimaginable forces of space capsule re-entry. Ms. Johnson was responsible for getting the astronaut up, but Mary Jackson was responsible for getting him down, alive. Persistent problems with heat shield pieces flying off in the wind tunnel were mystifying, and lethal. She and the chief scientist developed a system of tiles that is still used today. She published a dozen technical papers in the meantime.

Spencer plays Dorothy Vaughan in the most powerful performance of the movie. Originally placed in a team of “human computers” composed entirely of African-American female mathematicians, she saw the handwriting on the wall when the first digital mainframe computer was installed on the site. The computer would soon replace almost every human doing calculations in the program. The only problem was that it did not work.

She scrounged up the Fortran programming manual, taught herself to write code, made the behemoth work and led a truly inspiring charge to get her group transferred to programming tasks. Not only did she save dozens of jobs and make the computer transition immeasurably faster and better, she spearheaded modern computer programming development. Spencer’s performance is a work of art that brings a tear to the eye of even the most jaded techie.

Good supporting work by Kirsten Dunst as the unknowingly racist supervisor and impeccable sets and costumes help to make this a stand-out movie. If the currently released “Jackie” has a slight edge in glossy production design, the heart and soul of “Hidden Figures” makes it stand a full head taller. This is a must-see for techies of all persuasions and a stealth flick for girls showing a penchant for the sciences. Be there or be grounded. 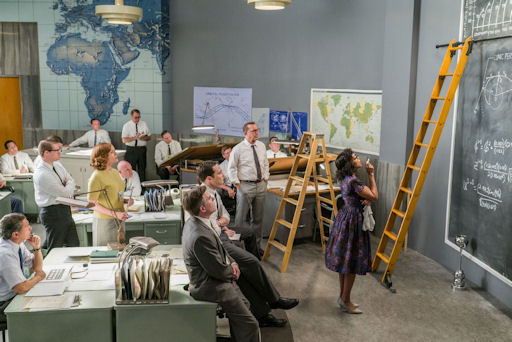