Screened at the 2013 New York Film Festival, Roger Michell’s (“Notting Hill,” “Venus”) newest elder rom-com is less of romp than a stroll. The screenplay openly dares the most romantic city in the world to pull the couple back from the abyss of the autumn years and generates a good bit of wry humor in the process. Jim Broadbent (“Iris,” “Topsy-Turvy”) is tweedy, tousle haired professor Nick and Lindsay Duncan (“Alice in Wonderland,” “Mansfield Park”) is young at heart school teacher Meg. The middle-aged marrieds came to Paris looking for life and found a vacation-life crisis, and Jeff Goldblum. But that is getting ahead of the story.

Seeking to rekindle the love they had once known, their two day experience in Paris ranges from near suicide to near homicide to over-the-top hilarity as the couple tries to be young again. They revisit the city of their honeymoon with high hopes and fond memories. But in the end, it’s all they can do to stay out of jail, and stay married. Mitchell reunites with “Venus” screenwriter Hanif Kureishi who penned this touching and comic tale of romance in the marginalizing years of near-retirement.

Nick is a philosophy professor doing what 99% of philosophy professors do, making ends meet. His school has grown with the times in the direction of the polytechnic, leaving the liberal arts faculty scattered and bobbing in the wake of personal computer operating systems and Internet gaming. Meg is a teacher at a girls’ school where it seems nothing of lasting value is known or sought after, anymore. Their son is a down and out pot-head who has made it clear he never wants to see them again, or heard about their old-school rubbish. In all cases, life is rapidly leaving the old school intellectuals behind as they enter the unknown territory of retirement where they will have to live with each other, all day long. Yikes!

All they have their love and they are darn-well going to keep it alive. Even if it kills them.

Venturing to Paris from their home in England, the two find The City of Light not the same as they remembered it, several decades earlier. Their favorite old pension’ has changed. It is no longer hip and artisan, it is now dreary and populated more by the bereft people than the beautiful people. Pulling out the credit card, they decide one only lives once and the rest of the weekend is on the house, eh, the credit card. 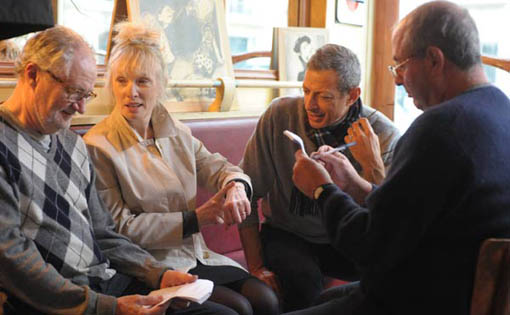 Bumbling into old friend Morgan (Jeff Goldblum), they agree to go to his party, a who’s who of the intellectual, elite, young and eligible. Meg falls for a singularly brainy and sexy young man who is young enough to be her son (or grandson, in some states). This chance meeting has them at odds with each other and their revelations during the ensuing dinner have them at odds with their host and the rest of the party.

A dodgy move at a very expensive restaurant, helped, no doubt, by the perfect disguises as sophisticated, learned pedants, keeps them one step ahead of the credit card computer, after they have spent what must have the better part of a thousand dollars on art picture books. Thrown out of their hotel, with the staff after them for defacing the walls with pinned up pictures from the art books, they are out on the street, their passports held captive by a vindictive Parisian staff who seen to forgotten everything they loved about their allies the British in WWII.

Divulging to one another that there are employment, and income, problems, and confessing their worst dreads about growing old, the two echo the hopes and fears of lovers around the world. Being on the street and having nothing except the phone number of Morgan, who they would just as soon never see gain, brings back memories of youth as painfully beautiful as the day they were married. Perhaps life is, indeed, as Lennon put it “What happens while you are making other plans.”

Perhaps The City of Light has more surprises in store for both of them than one could ever imagine. Great cinematography in a rapid fire sequence of beautiful settings, each one carefully designed to pull at the heartstrings. No matter how superficially dreary, the city seems to brings out the best in people, and in life.

A delightful, light hearted production with a cast of three of the most accomplished actors in the business, all of whom are completely in their element and enjoying themselves as never before. 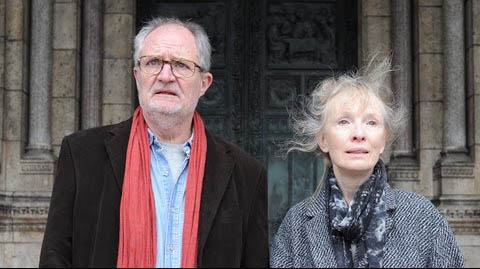